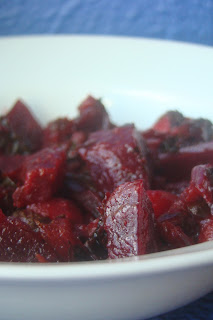 If you're looking for a new grain-free side dish, try out these caramelized beets and carrots!  This recipe actually morphed out of a mistake when I was trying to make cold beet soup last summer.  Since then, this has become a favorite side dish in our house (excepting my husband who has a very strong aversion to beets; both of the kids and I just gobble this up). The combination of beets, carrots, and garlic give this dish a wonderful flavor.

Caramelized Beets and Carrots
Makes 4-6 servings
Prep time: 10-15 minutes
Cook time: 1 hour
*If you don't rinse the beets and beet greens very well, you may end up with sandy grit in your teeth. Ick.

This post is part of Fight Back Friday, Pennywise Platter, Real Food Wednesday, Fat Tuesday and Monday Mania!
Posted by Sarah Smith at 6:00 AM 4 comments: 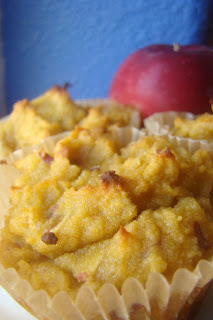 This time of year, fresh local apples are showing their colors at our farmer's market. These apple cinnamon muffins are a wonderful breakfast treat, sure to please the whole family.

Apple Cinnamon Muffins
Makes 12 muffins
Time-saving tips:
*If you use an immersion blender to combine the ingredients, you can skip the step of sifting the coconut flour.  This also gives you less dirty dishes!
**While you are at it, why not make a double batch of muffins and throw one dozen into the freezer?  It doesn't take much more time, and they will make a very easy breakfast for some other week. 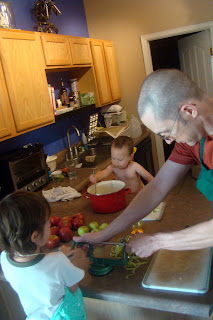 Fresh apples are a wonderful treat at this time of year.  I try to avoid buying apples at other times of year when they are not in season (like during the spring and early summer).  Eating fruit as it comes in season is a great way to ensure that the fruit you buy will always be fresh and delicious, rather than picked and then transported for weeks from some far away locale.

Enjoy them fresh
We love to eat apples raw, but there are also some great ways to cook with apples.  If you haven't tried apple clafoutis yet, give it a whirl.  It is one our top five grain-free breakfasts. Cooked apples make a delicious side dish alongside pork or chicken.  I'm also working on a recipe for grain-free apple cinnamon muffins.

Preserve some apples
To extend our apple enjoyment, I am preserving lots of apples this year.  An apple corer-peeler-slicer has been essential to save time.  So far, I've put away one bushel (40 pounds), and hope to buy some more apples while the season lasts.  I've made: 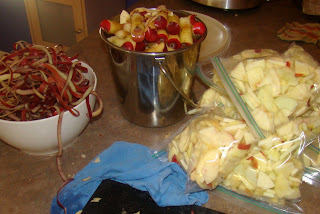 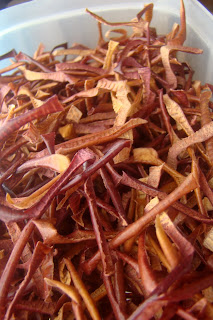 What are your favorite apple recipes? Are you preserving any apples this year? 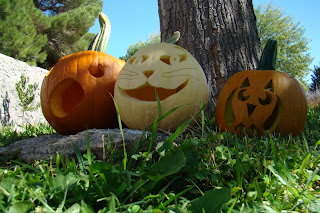 Although we've never allowed our daughter to have much candy, Halloween is still a holiday she greatly enjoys.  This includes, of course, trick-or treating.  This will be our second Halloween while on the GAPS diet, so I thought I'd share some ideas for avoiding candy overload.  With all of these options, make sure you talk to your kids in advance of Halloween so they know what to expect. 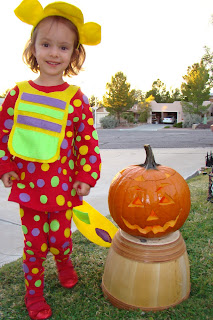 Do you have any ideas for limiting candy on Halloween?

Interview about Our GAPS Journey on Wooly Moss Roots

Taryn, from Wooly Moss Roots, has interviewed me about the GAPS diet.  Some of the interview questions were:
Head on over to Wooly Moss Roots to check out the full interview!
Posted by Sarah Smith at 6:00 AM 4 comments: 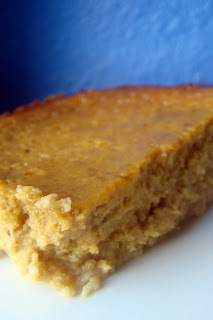 Fall always makes me think of pumpkin.  This clafoutis recipe is spiced like pumpkin pie and so delicious!  It is rich and has just enough body to stand-in for the usual pumpkin pie. Serve it as breakfast alongside some bacon or sausage, or top it with whipped cream for a special dessert.

Pumpkin Pie Clafoutis
Serves 5-7
*You may need to add a bit more of the spices if you substitute coconut products for the dairy, as the coconut flavor may mute the spices.

As a mother of two young children, one of the biggest challenges to cooking real food is keeping the kids happy while I work in the kitchen. Some ways I have found to keep the kids content are: 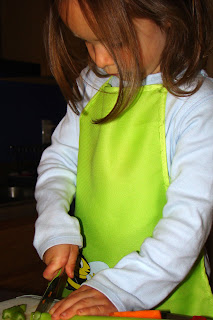 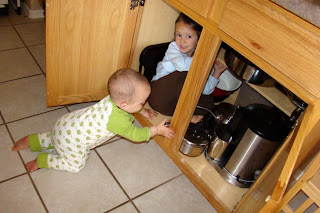 What are your favorite ways to keep the kids happy while you work in the kitchen? 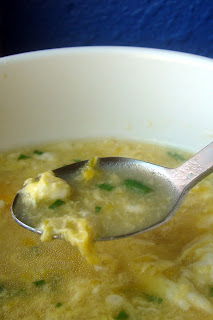 Egg drop soup is a wonderful way to eat some nourishing eggs and broth.  This recipe is subtly spiced with sesame oil, soy sauce, and ginger.   It is so simple to make in just a few minutes, and makes a wonderful side dish or even main course.

Egg Drop Soup
Serves 2-3 as a main course
Serves 4-6 as a side dish
*Soy sauce is not GAPS-legal. However, my family has had no problems with using this very small amount in our GAPS diet.
This post is part of Fat Tuesday, Monday Mania, Fight Back Friday, Pennywise Platter and Real Food Wednesday!

A few months back I announced a solar cooking challenge.  No one actually signed up for the challenge, but I thought I should still keep my promise to fill you in on the results of my own solar cooking experiments. 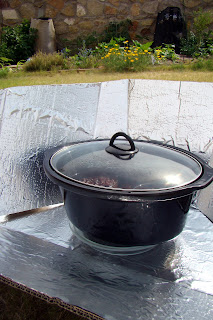 I did a bit of experimenting with cooking in the solar cooker, and I used a spreadsheet to track each cooking experiment (hey, if you are going to experiment, you may as well keep track of all of your variables).  Each time I used the solar cooker, I recorded the sun conditions, time of day, cooking durations, food cooked, solar cooker configuration (facing different directions, using different cookware, etc), temperature of the food, and results.

Pros and Cons of Solar Cooking
Some great things about solar cooking are:
I learned some down-sides to solar cooking:

Solar Cooking is Great for Lunch Time!
The prime time to generate heat with the sun in the summer here is from about 10am to 3pm. The solar cooker works great for quick lunch cooking such as reheating leftovers or cooking hot dogs. Hot dogs were ready in about 30 minutes (yes, that is slow compared to the stovetop, but this is solar cooking after all so the temperatures are lower). Raw sausages take a little longer, needing an hour to be cooked thoroughly. 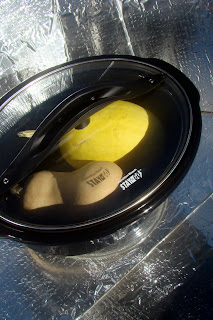 Solar Cooking is Great for Cooking a Winter Squash
One of my favorite ways to use the solar cooker is for cooking winter squash.  All you have to do is put the squash in whole and let it cook for several hours in the sun.  You can do this the day before you need to use the squash, or even early in the day so it will be ready when you need to use it for dinner.

Tips for Cooking Dinner in a Solar Cooker

Now What?
Do I use the solar cooker often? No, I don't use it very often.  Most frequently, I use it for cooking winter squash or heating up lunch.  Beyond that, it would also be great to have around in case of an emergency or disaster.  It was a fun experiment, though.

Have you ever tried solar cooking?

This post is part of Fight Back Friday, Pennywise Platter, Real Food Wednesday with Kelly the Kitchen Kop, Fat Tuesday at Real Food Forager and Monday Mania at The Healthy Home Economist!