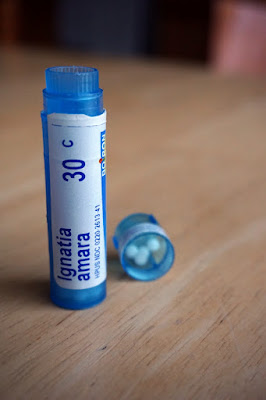 Ignatia is known to help with the following types of emotional stress:

Symptoms That Often Point to Ignatia

Some of the symptoms that may be present when a person will benefit from Ignatia include the following. These symptoms do NOT have to be present in order for Ignatia to be indicated, as they represent just a few of the many possible symptoms that can indicate Ignatia.

Success With Ignatia for Emotional Stresses

Some examples of using Ignatia for acute emotional stress from the homeopathic literature include the following: 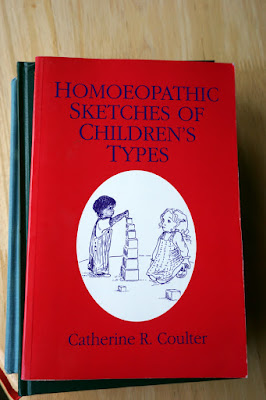 In my own family, Ignatia has worked well for various emotional stresses in daily life. One such example was a couple years ago, when one of my daughter's chickens was taken ill. That same night, my daughter was suddenly ill, with a high fever and by the following day she was quite ill. Ignatia proved to be the right remedy for her, and quickly cleared up her acute illness.  On subsequent questioning, my daughter told me that she had been worried that her chicken was going to die.

Since then, there have been several other times when my daughter has felt grief over animals dying, and I've been able to give her Ignatia earlier before any physical symptoms have developed. I've used Ignatia for myself, as well, at times when I've had large disappointments that I kept dwelling on, and other times when there has been loss or grief. Each time, Ignatia has allowed me to quickly get out of the rut I was becoming mired in, and  re-normalize my emotional state.

I generally use homeopathic Ignatia in the 30c potency for treating acute emotional events. When used very soon after the precipitating event, typically only one dose is needed for the body to restore balance. When there has been a time lapse between the event and the usage of Ignatia, sometimes more than one dose is needed.

With all homeopathic remedies, the least number of doses is always the best.  Homeopathic remedies work by stimulating the body to heal itself. Anytime there is a noticeable improvement, no more doses should be given unless the symptoms start to regress (or unless there is a plateau, where the symptoms get better to a point but then stop improving). And if no improvement is observed within 3 doses of taking a remedy, the remedy should be discontinued.

While Ignatia typically works quite well for treating acute emotional events, in cases of long-standing feelings of grief or loss the selection of the appropriate remedy is typically more complex. Ignatia might still be helpful in those instances, but often the chronic state will instead morph into needing a different remedy such as Natrum mur, Phosphoric acid, or Aurum metallicum.

Affiliate Disclosure - Links to Amazon are affiliate links. If you use these links, your price remains the same, but I earn a small commission. Thanks for supporting this site!

Review Request: My eCookbooks on Amazon


Here are links to each of the cookbooks:
Nourishing Eats
Nourished Cooking

Affiliate Disclosure - Links to Amazon are affiliate links. If you use these links, your price remains the same, but I earn a small commission. Thanks for supporting this site!
Posted by Sarah Smith at 1:49 PM No comments: 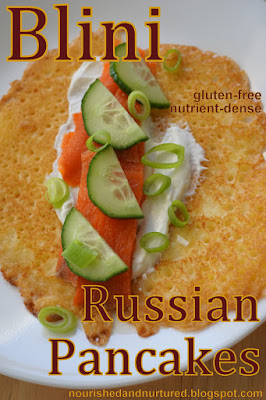 Blini - I had never heard of these thin Russian pancakes before our homeschool world studies last fall.  Now blini are an adored recipe in our household, and everyone is excited for Blini Night. On Blini Night, I work at the stove, cooking the blinis, while everyone keeps coming back for more. We have both savory and sweet toppings ready, and it feels like a simple feast.

For the savory blini, we use sour cream with smoked salmon, thinly-sliced cucumbers, capers, and green onions. Our sweet blinis are topped with sour cream and jam, honey, or strawberries. Sour cream, salmon, and honey are all traditional Russian foods, so these toppings work well for our Russian-inspired meals. 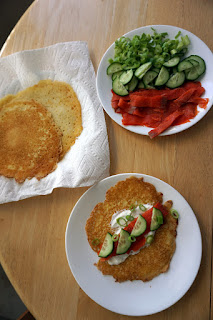 Traditionally, blini are made with either buckwheat or wheat flour. Since two members of our household are still most often avoiding gluten, and tolerate other grains to varying degrees, I make our blini primarily with white rice flour. Tapioca starch is used to give the blini a bit of holding power, since blini made with only rice flour break very easily. Milk kefir gives these blini a fantastic taste. 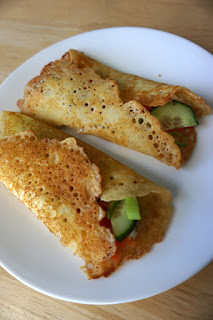 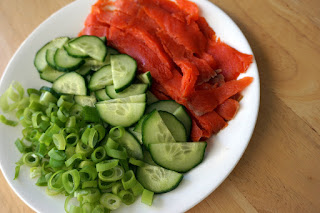 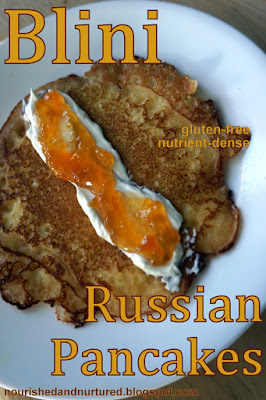 Affiliate Disclosure - Links to Amazon are affiliate links. If you use these links, your price remains the same, but I earn a small commission. Thanks for supporting this site!
Posted by Sarah Smith at 12:03 PM 5 comments: 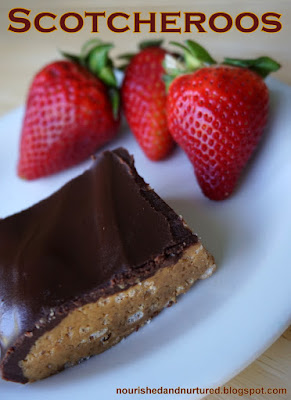 I have fond memories of one particular item that was part of the school lunch program when I was a kid. It was a peanut butter bar, covered in chocolate, and I was always so happy on the days it was served. I never knew the name this dessert until recently, when I was researching recipes for the midwestern United States. I kept seeing Scotcheroos mentioned, and I was gleefully surprised to see that Scotcheroos were the treasured relic from my childhood cafeteria!

Most Scotcheroo recipes are loaded with high fructose corn syrup combined with butterscotch chips, peanut butter, sugar, rice crispies, and chocolate chips. I initially tried to dismiss the idea of making Scotcheroos, as they obviously are not a healthy item. High fructose corn syrup plus butterscotch chips (made with even more undesirable ingredients, such as partially hydrogenated vegetable oil); not for my family!

But yet, I kept thinking about Scotcheroos, remembering how much pleasure they brought to me as a child and thinking how sweet it could be to share that with my own children. So I finally decided to embark on creating a healthier Scotcheroo, one that was devoid of those uber-processed ingredients and instead made with healthier ingredients such as honey, sucanat, and butter.  I'm not claiming these Scotcheroos are healthy and perfect; they do still have some processed ingredients, but they are much healthier than the typical Scotcheroos.

It has been fun to share this food-from-my-childhood with my kids. Oh, and did I forget to mention? These Scotcheroos are DELICIOUS! Rich, sweet, creamy, crispy, and oh so yummy. 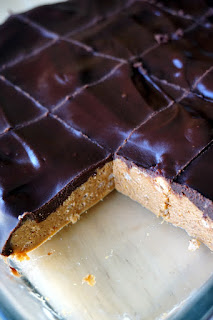 Make the Peanut Butter Mixture
Make the Chocolate Butterscotch Topping
Bring It All Together: 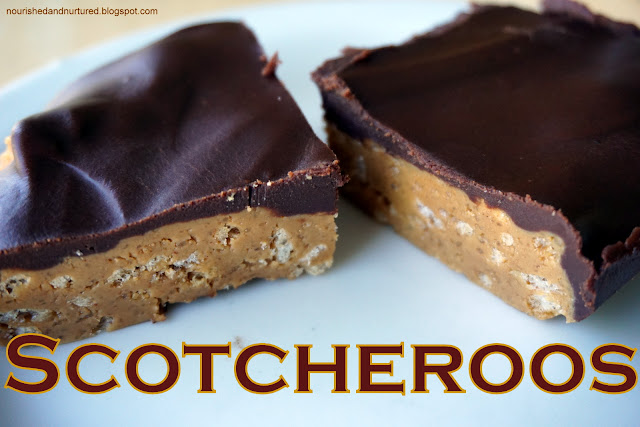 What is your favorite childhood dessert?

Affiliate Disclosure - Links to Amazon are affiliate links. If you use these links, your price remains the same, but I earn a small commission. Thanks for supporting this site!
Posted by Sarah Smith at 8:01 AM No comments: 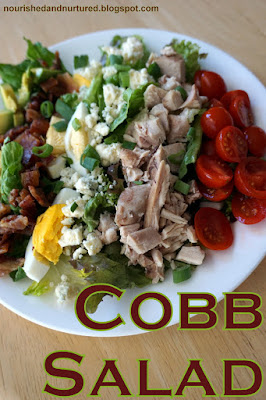 As my children and I are wrapping up our unit study on the United States, we're "visiting" the west coast.  Cobb Salad is a California specialty that has become a mainstay salad all over the country.

An easy way to remember the ingredients in Cobb Salad is to use the acronym EAT COBB - Egg, Avocado, Tomato, Chicken, Onion, Bacon, Bleu cheese. My family enjoyed this hearty salad recipe, although it was preferred to substitute goat cheese for the bleu cheese.

Cook the chicken:
Cook the bacon:
Boil the eggs:


Bring it all together: 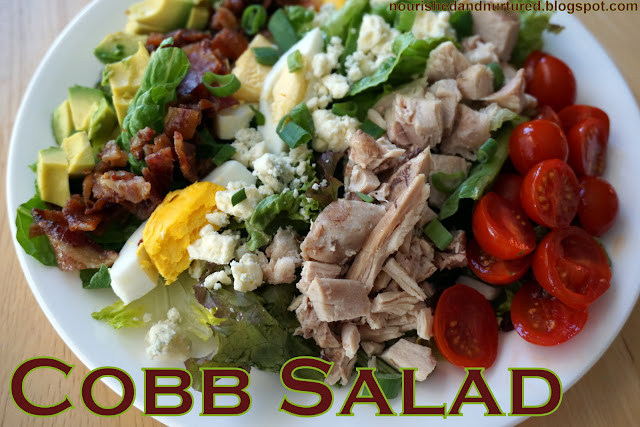 Affiliate Disclosure - Links to Amazon are affiliate links. If you use these links, your price remains the same, but I earn a small commission. Thanks for supporting this site!
Posted by Sarah Smith at 3:47 PM No comments: 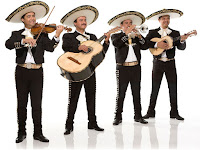 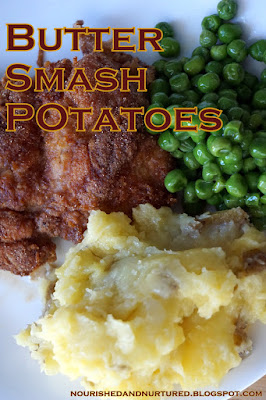 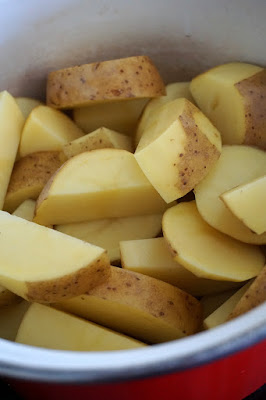