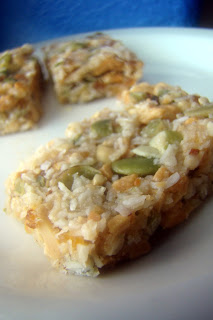 During a recent out-of-town trip, my family fell in love with my mother-in-law's homemade Fruit and Nut Bars. Upon our return home, my husband begged requested that I learn to make some of the bars.  Chewy, slightly sweet, and nicely filling, these Power Bars make for a quick breakfast or a great grab-and-go snack any time of day.

This recipe is based on my mother-in-law's delicious Fruit and Nut Bars, of which the original recipe can be seen on the Honey Pacifica blog. When possible, the nuts and seeds should be "crispy nuts," which have been prepared with the traditional method of soaking in salt water and then drying at a relatively low temperature.  This traditional method helps in reducing the naturally-occurring anti-nutrients that are present in nuts and seeds. 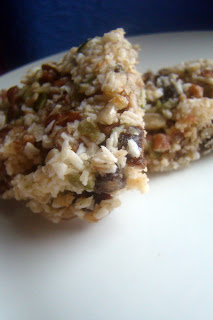 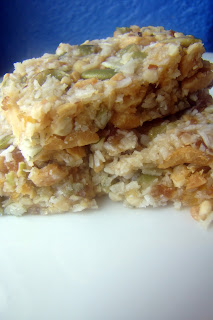 *Measure the amounts after chopping the ingredients rather than before.

Links to Amazon are affiliate links. If you use these links, your price remains the same, but I earn a small commission. Thanks for supporting this site!
Posted by Sarah Smith at 6:39 AM 7 comments: 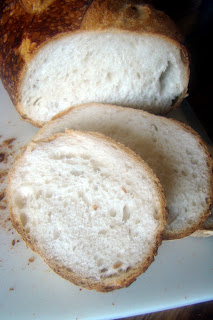 Prior to the GAPS Diet, my family did not eat any refined grains, such as white flour and white rice.  Instead, we ate whole grains, prepared by soaking or sprouting to reduce anti-nutrients (such as phytic acid, which can prevent mineral absorption). While transitioning off the GAPS Diet, I was interested to find that whole grains actually caused me to have digestive problems, and they caused a recurrence of my joint pain (which was the main reason I started the GAPS Diet in the first place). Surprisingly, refined grains such as white rice did not cause me to have any of those problems.

Now I've been off the GAPS Diet for about 18 months. After GAPS, I initially avoided eating wheat because ingesting gluten caused me to have headaches and restless legs. But through my constitutional homeopathic treatment, I've now reached the point where I no longer react to gluten.

Those of you who have been following my blog for awhile may recall that, after suffering from adrenal crash while on GAPS, I learned that I need to make sure to eat enough carbohydrates to keep my energy levels stable. Sourdough white bread is a healthy, delicious, and easy way for me to get enough carbs. 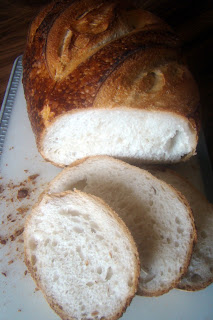 The bread I eat is a true sourdough bread. This means that it is naturally fermented, and there is no yeast added to make the bread rise. True sourdough white bread actually has a more beneficial affect on blood sugar than (non-sourdough) whole grain bread. According to an article in Wise Traditions,

Using white, whole wheat, whole wheat with barley and sourdough white breads, researchers at the University of Guelph examined how subjects responded after eating bread for breakfast and again after lunch. The ten male subjects, who were overweight and ranged between fifty and sixty years old, showed the most positive body responses after eating sourdough white bread. With the sourdough, the subjects’ blood sugar levels were lower for a similar rise in blood insulin, and this positive effect remained during the second meal and lasted hours after. Surprisingly, the worst results were seen after consumption of whole wheat and whole wheat with barley bread, which caused blood sugar levels to spike, with high levels lasting until well after lunch. According to Professor Terry Graham, head researcher on the project, the fermentation of the sourdough “changes the nature of starches in the bread, creating a more beneficial bread.”


Additionally, there are some in the traditional foods movement who actually don't advocate eating whole grains. For instance, Rami Nagel, author of Cure Tooth Decay, has found that in traditional cultures, much of the bran and germ was actually discarded after the whole grains were ground into flour. While it is true that the bran contains many nutrients, it also contains anti-nutrients such as phytic acid. Sprouting and soaking of whole grains can reduce the amount of anti-nutrients, but those processes often do not completely eliminate the anti-nutrients. (There is lots more wonderful information about this topic in the article Whole Grains Can Cause Tooth Decay.)

I know that, for me, sprouting and soaking are not enough to make whole wheat easily digestible (nor for my 3-year-old son, who is very gassy if he consumes sprouted wheat bread). To my surprise, we both just do better eating sourdough white bread rather than sprouted whole grain bread. For many months, my son and I have both eaten sourdough white bread several times each week, with no issues.  We are fortunate enough to have a local bakery that makes true sourdough bread.

(At this point, my daughter and husband still do best by eating very little grains of any kind, and especially avoiding modern gluten-containing grains.  There is one startling grain that they can both consume, which I will talk about in a future post.)

Are there any surprising foods in your healthy diet? Have you tried true sourdough breads?

Links to Amazon are affiliate links. If you use these links, your price remains the same, but I earn a small commission. Thanks for supporting this site!
Posted by Sarah Smith at 6:00 AM 23 comments: 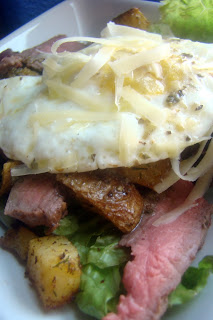 This scrumptious salad combines some of our favorite foods: steak, fried potatoes, avocado, and fried eggs.  Served over a bed of lettuce and topped with a simple herb vinaigrette, this salad is a sure hit for everyone in the family.  It will even please those carnivore-types who think that salads aren't filling enough to eat for dinner.

This salad works great with leftover or freshly prepared steak and potatoes. 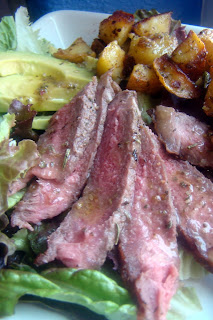 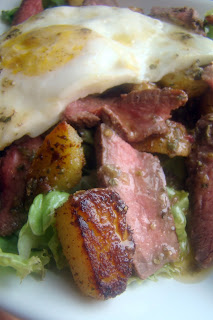