How to Make Flavored Kombucha Tea 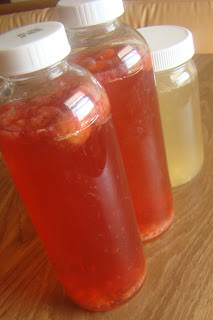 We've been brewing our own kombucha tea for several years now.  We brew multiple gallons of kombucha at a time, and over the last year or so we've experimented quite a bit with making different flavors. Making flavored kombucha tea is really quite simple to do, but there are some subtle differences to making each flavor the best it can be.


Start with Some Finished Kombucha

To make flavored kombucha, you need to start with some plain kombucha. You can see my recipe for making kombucha tea here. We pour the finished kombucha into 2-cup jars and flavor each jar individually. We like to save bottles from the GT's kombucha sold in stores for this purpose, and we also use mason jars.  If you want your kombucha to be extra fizzy, Fido jars work well.  I wouldn't recommend using bottles with very small openings with this method, as it will be particularly difficult to clean them out and make sure that all the flavoring bits are removed. 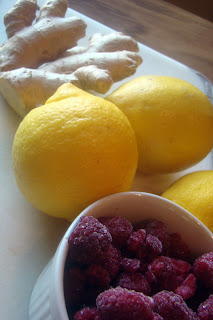 These are the flavors we keep making time and time again. With all of these flavors, a short fermenting time on the counter helps develop the flavors and create a bit of fizz.  The ideal fermenting time varies a bit with each flavor, so read below for specific details.  All of the amounts listed below correspond to a 2-cup (16-ounce) jar of plain kombucha. 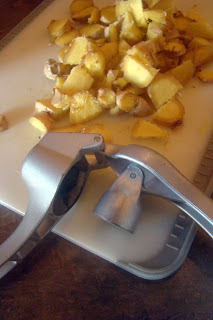 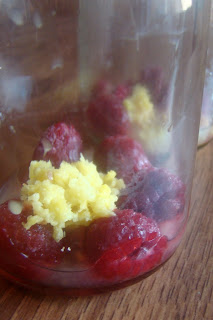 Some Flavors We Haven't Enjoyed

There are a few flavors of kombucha we have tried that did not turn out so well: strawberry, orange, blueberry, and blackberry.  They are still drinkable, but nearly as tasty as our favorite flavors.


Do you brew your own kombucha?  Do you enjoy it plain, or flavored?  What is your favorite flavor?


This post is part of Fat Tuesday!
Posted by Sarah Smith at 6:00 AM 13 comments: 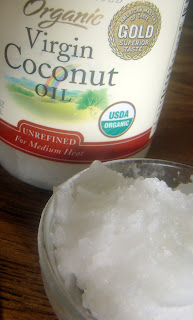 Most storebought face moisturizers contain ingredients I'd rather not apply to my skin. Chemicals in contact with skin can be absorbed into our bodies.  According to the Environmental Working Group's Skin Deep website, storebought moisturizers such as L'Oreal and Olay contain ingredients that can potentially cause cancer, endocrine disruption, and reproductive toxicity.

What About "Organic" Face Moisturizers?

"Organic" face moisturizers generally contain better ingredients, but they tend to be very expensive.  And I have found them to be totally unnecessary, since my One Ingredient Face Moisturizer works wonderfully.  If you eat real foods, this is probably something you already have on the shelf!

I've been using unrefined coconut oil as a face moisturizer for nearly two years.  It smells great and works wonderfully. When applied sparingly, it is readily absorbed by the skin, and will therefore not lead to an oily appearance. Unrefined coconut oil is also very healthy for the skin.  It contains lauric acid, which is antimicrobial and antiviral, so it is great for acne-prone skin.

How to Use Coconut Oil as a Facial Moisturizer

The method I use for applying unrefined coconut oil as a facial moisturizer is as follows:


It Works Great All Over the Body Too!

I also like to use unrefined coconut oil as a moisturizer all over my body. The same rules apply: washing first with very warm water, lightly blotting the skin dry so that it is still a bit damp, and then applying the coconut oil right away.  I find it works best to keep the coconut oil in the shower, so I can apply it before I even step out of the shower. Goosebumps definitely seem to keep the oil from absorbing, so I apply it while I am still toasty warm from the shower.

What do you use as a face moisturizer?

This post is part of Fat Tuesday!
Posted by Sarah Smith at 6:00 AM 30 comments:

This post is the second in my series on homeopathy basics. 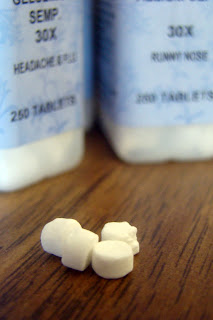 The Body Has an Innate Wisdom

In homeopathy, there is a belief in the innate wisdom of the body. This means that, when the body manifests symptoms, it does so at the least vital level. The symptoms are not the enemy, rather they are an indication that there is a disturbance in the body's vital force. The vital force is "responsible for the orderly and therefore healthy running of the body, and for coordinating the body's defenses against disease." [1]  (Another, more simple way to think of the vital force is that it is the body's immune system.) Whether the reason for the disturbance to the vital force is obvious (such as exposure to a flu) or harder to understand (such as eczema or chronic pain), the symptoms are the body's best possible defense against the disturbance.

Conventional medicines work through the premise of symptom suppression. If there is a cough, a medicine is given to suppress the cough. If there is a rash, ointments and steroid creams are applied to suppress the rash. If there is an abnormal growth, it is surgically removed. In the short term, this may seem like a reasonable path to follow, but the problem with this approach is that it does not address the fundamental disturbance which led to the symptoms in the first place.

Given that the body has innate wisdom and wants to express any disturbance of the vital force by creating symptoms at the least vital level, suppressing these symptoms cannot lead to health. When symptoms are suppressed, they are pushed deeper. The underlying disturbance is still present, and the body then needs to express it at a deeper level (since the least vital level has already been suppressed).

Let's use eczema as an example. Eczema is a rash that may appear on the body. When a suppressing ointment such as cortisone cream is used to make the eczema "go away", the rash may indeed disappear but the underlying disturbance that caused the rash in the first place is still present. The eczema may go away, but in it's place there are likely to be respiratory tract problems such as asthma or bronchitis. Thus, the cortisone cream has pushed the disturbance to a deeper, more vital level of the body.

The Hierarchy of Bodily Systems 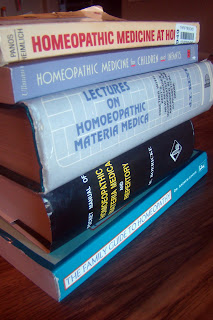 Skin ailments, such as eczema, are bothersome, but they are at the least vital level of the body. When eczema is suppressed and respiratory problems develop instead, the person has moved further from a state of health than they were with just eczema.

When conventional medicines are used, all that is gained is temporary relief followed by even worse health at deeper levels of the body. When homeopathy is used, the body is stimulated to cure the underlying disturbance that led to the symptoms in the first place. In this way, true health is gained.


NOTE: I am not a physician or licensed healthcare practitioner. The information I provide is intended to educate, and should not be construed as a prescription. You are responsible for determining whether or not you want to take advantage of the information offered. 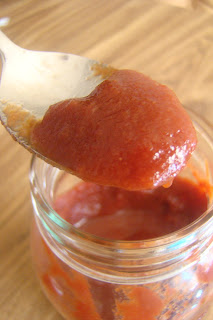 While we enjoy my basic ketchup recipe as well, lately we've really been enjoying this spiced ketchup recipe. This ketchup is a bit sweeter and more like store-bought ketchup than my other recipe. It is a bit like a cross between ketchup and barbecue sauce. The ketchup is great on bunless burgers, hot dogs, and with french fries.

Since this ketchup is fermented, it is a great source of probiotics too!
Homemade Spiced Ketchup
Makes 1 quart