December in Our Homeschool 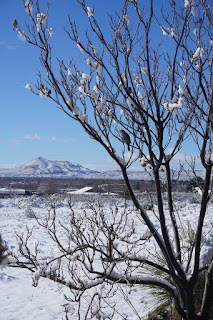 For the last few years, each December we've had a special month in our homeschool. I let a few things drop off my homeschool mental to-do list (such as science and history exposure), and instead we shift our focus to holiday-related activities. This makes December a month to celebrate the flexibility of homeschooling while we dig into more artistic and musical pursuits.

Our curriculum focus for December includes the following. I don't require my children to participate in these activities, but nonetheless they generally both choose to participate in all of these to varying degrees. 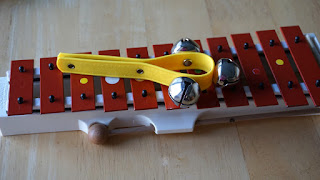 The children and I choose a few Christmas songs to play together. Throughout the month, we practice individually and together, as much as we each desire to. On Christmas Eve, we perform the songs together. The instruments we have on-hand for our Christmas songs are:
(If there is interest, I can post more details about how and what we do for our December music together.) 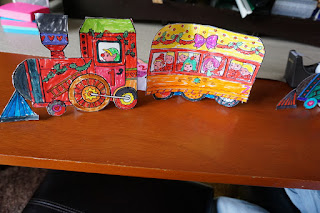 As a fun way to count down the days until Christmas, my children enjoy doing Advent crafts, which have one activity for each day from December 1st through 24th.  My kids have especially enjoyed doing the Advent Colouring Pages from Activity Village, such as the Christmas train and village, which can be cut out and made into a scene.

The Activity Village Advent resources used to be free, but are no longer.  Some other free options I have found include the following:
Commonly, my kids are really excited about Advent crafts for the first couple weeks of December, and then their interest fizzles out. This is totally okay, and I just let them participate as much (or as little) as they want to.

In the week leading up to Christmas, my children and I get to work on making homemade Christmas presents for family and friends.  The presents we've made have included Christmas tree ornaments, cardboard and/or popsicle stick toys, artwork, and food treats. This is an inexpensive and sweet way to shift the focus of Christmas away from ourselves and onto what we can make for others. 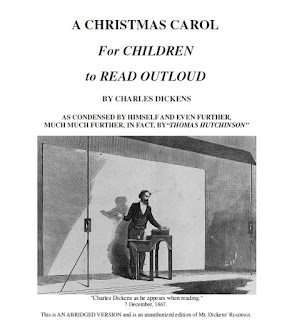 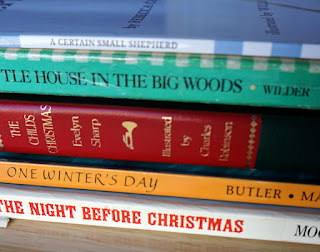 Throughout the month of December, I read-aloud books which have an emphasis on winter and Christmas. These include the following:

For our weekly Family Movie Nights in December, we watch winter and Christmas movies. Some of our favorites include the following:

A Great Way to End the Year

By shifting the focus in our homeschool for December, we are able to thoroughly enjoy the last month of the year together.  Instead of feeling like we are dragging our feet or going through the motions, December has become a cherished month of homeschooling for our family.

Do you have any December homeschool traditions to share?

Affiliate Disclosure - Links to Amazon are affiliate links. If you use these links, your price remains the same, but I earn a small commission. Thanks for supporting this site!
Posted by Sarah Smith at 8:05 AM 3 comments:

Sepia - A Homeopathic Remedy for Mothers 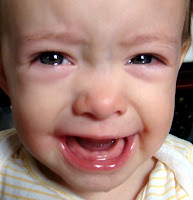 Motherhood: at it's best, it can fill our days with joy, sweetness, and contentment. Yet, on the worst days, being a mother can be one of the hardest challenges of life. The ups-and-downs of pregnancy, the constant demands of children, the feeling that we will never be able to have a single moment to ourselves; these feelings seem to just come with the territory of being a mother. But is there a better way?

There is one well-known homeopathic remedy that is of immense help to mothers. It can help those bad days feel less dire and dramatic, and make them happen less often. Homeopathic Sepia to the rescue!

Although the word Sepia is commonly used to describe the reddish-brown tone of old photographs, the origin of this word is actually the Latin word for cuttlefish. Cuttlefish ink is a rich brown color, and it was used as an ink or drawing medium for thousands of years. Homeopathic Sepia officinalis is a remedy made from the ink of the cuttlefish.

While homeopathic treatment of chronic conditions is typically not do-it-yourself, there are certain chronic ailments that are somewhat easier to treat. These are ailments where there was an obvious trigger, known as a Never-Well-Since event or exposure. For instance, chronic ailments following head injuries are often successfully treated with Natrum sulph or Arnica, and ailments following a broken heart are often successfully treated with Ignatia or Natrum mur.

Homeopathic Sepia is listed as a top remedy for the following Never-Well-Since events/exposures [1 - Hahnemann Revisited: A Textbook of Classical Homeopathy for the Professional]:

Clearly, Sepia's healing action has a particular focus on hormonal-induced states in women. While it is not a cure-all for each-and-every mother, nonetheless a large proportion of mothers can benefit from Sepia.

As with all homeopathic remedies, Sepia will work best when it matches well with the mental, emotional, and physical symptoms that a person is exhibiting. The mental/emotional picture for Sepia is one of this remedy's most striking features. 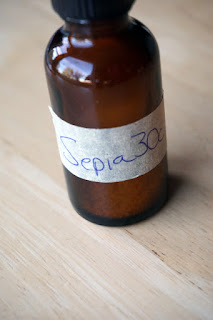 Some additional indications for Sepia include:
Although Sepia's overall sphere of action includes a wide variety of symptoms, that does not mean it is "the" remedy for all of those conditions. There are over a thousand different homeopathic remedies, and common symptoms such as headaches are associated with hundreds of different remedies.  For instance, in my homeopathic software, 845 remedies are listed under "constipation" and 1,249 remedies are listed for "headache".

What makes homeopathic remedies so effective is that they are selected specifically for each individual. No homeopath would recommend Sepia for every person who has a headache. However, if the person is a mother who is exhibiting some of Sepia's characteristic mental/emotional indications (described above), then Sepia is likely to be a good match.

Success With Sepia for Mothers

In my own life, I have found Sepia to be tremendously useful in helping to balance my emotions and leave me feeling contented with motherhood: 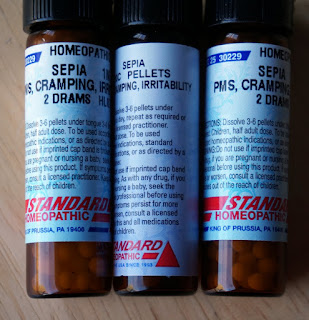 Some examples of treatment with Sepia from the homeopathic literature include the following:

I generally advise starting with homeopathic Sepia in the 30c potency, although for some people it may be more appropriate to start with a lower or higher potency depending upon their individual sensitivity level. When used very soon after the precipitating event (such as pregnancy or childbirth), it is possible that only one dose is needed for the body to restore balance. When there has been a time lapse between the event and the usage of Sepia, more than one dose may be needed.

If the Sepia state has become part of the chronic symptoms picture (with symptoms lasting more than 6 weeks), a good rule of thumb for simple dosing is to wait-and-watch for several weeks after the first dose to see if the Sepia is making a positive difference. With all homeopathic remedies, the least number of doses is always the best. Homeopathic remedies work by stimulating the body to heal itself. Anytime there is a noticeable improvement, no more doses should be given unless the symptoms start to regress (or unless there is a plateau, where the symptoms get better to a point but then stop improving). And if no improvement is observed within 3 doses of taking a remedy, the remedy should be discontinued.

While Sepia typically works quite well for treating mothers, in cases where the Sepia indications are long-standing it is possible that some other remedies will be needed before Sepia can do its work. For instance, if there have been significant traumas, losses, or drug-exposures in the meantime since the Sepia state was induced, those more-recent events/exposures may need to be treated before Sepia will be able to be effective.  In those instances, consulting with a well-trained homeopath is more likely to lead to long-term success with Sepia.

Affiliate Disclosure - Links to Amazon are affiliate links. If you use these links, your price remains the same, but I earn a small commission. Thanks for supporting this site!
Posted by Sarah Smith at 7:20 AM No comments: 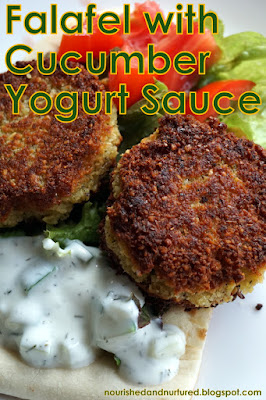 As part of our ancient history studies this Fall, I am digging into foods from ancient Mesopotamia, (which is in the region that is now known as the Middle East). Archaeological evidence shows that chickpeas were one of the earliest crops to be used in farming, as domesticated chickpea remains have been found dating back to around 10,000 years ago. In relatively modern times, one of the most common ways to cook chickpeas is to make them into falafels.

Falafels are delicious fried dough patties made with ground chickpeas, onions, and spices. While we had previously only enjoyed falafels when eating at a local Middle Eastern restaurant, my family has been delighted that I can now make falafels at home. The easiest way to make falafel dough is with a food processor, which makes it easy to grind the ingredients together. I have chosen to make our falafels into patties, so that I don't need to use quite so much oil when frying them. If you have a deep fryer, you could certainly make this falafel recipe into balls instead of patties.

My falafel recipe begins with soaking dried chickpeas in an acidic medium overnight. This important step reduces the phytic acid antinutrient that is naturally present in grains and legumes. Once the falafels are cooked, they are topped with jajeek, which is an Iraqi cucumber yogurt sauce. Falafel and jajeek are delicious in a salad or on pita bread. 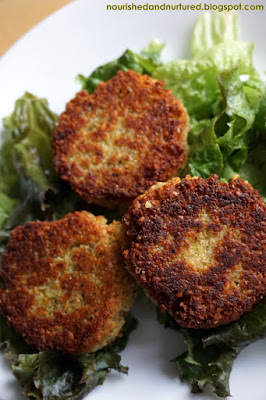 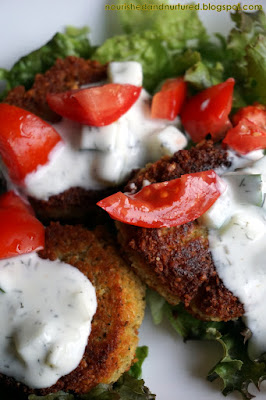 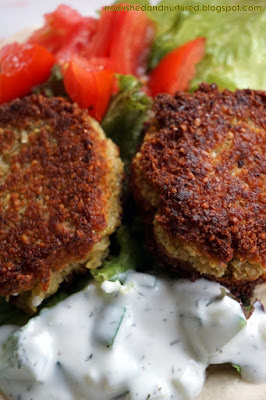 
Links to Amazon are affiliate links. If you use these links, your price remains the same, but I earn a small commission. Thanks for supporting this site!
Posted by Sarah Smith at 1:16 PM 2 comments: