With hot weather arriving here, I thought I'd share some of my favorite homemade skincare products. I blogged previously about my Top 10 Storebought Body and Hair Care Products, and now I am excited to share some of my favorite homemade products. I love using homemade skin products as they are healthier than most of the storebought products, and I can customize them to fit my family's needs.


On a daily basis, I don't use any sunscreen at all, but on days when I will be outside for extended periods of time I find that I am likely to burn without sunscreen.  We have a high UV factor here in the dry desert with its many sunny days, especially at our altitude. I have always abhorred store-bought sunscreens: they were too heavy, some were greasy, and they often led to breakouts on my face.  About a year ago I decided to try making my own sunscreen after reading this Natural Homemade Sunscreen post.

I opted to try the "Even Faster Way to Make Sunscreen" from that post, and have been very happy with the results.  My own homemade sunscreen is made by combining the following: 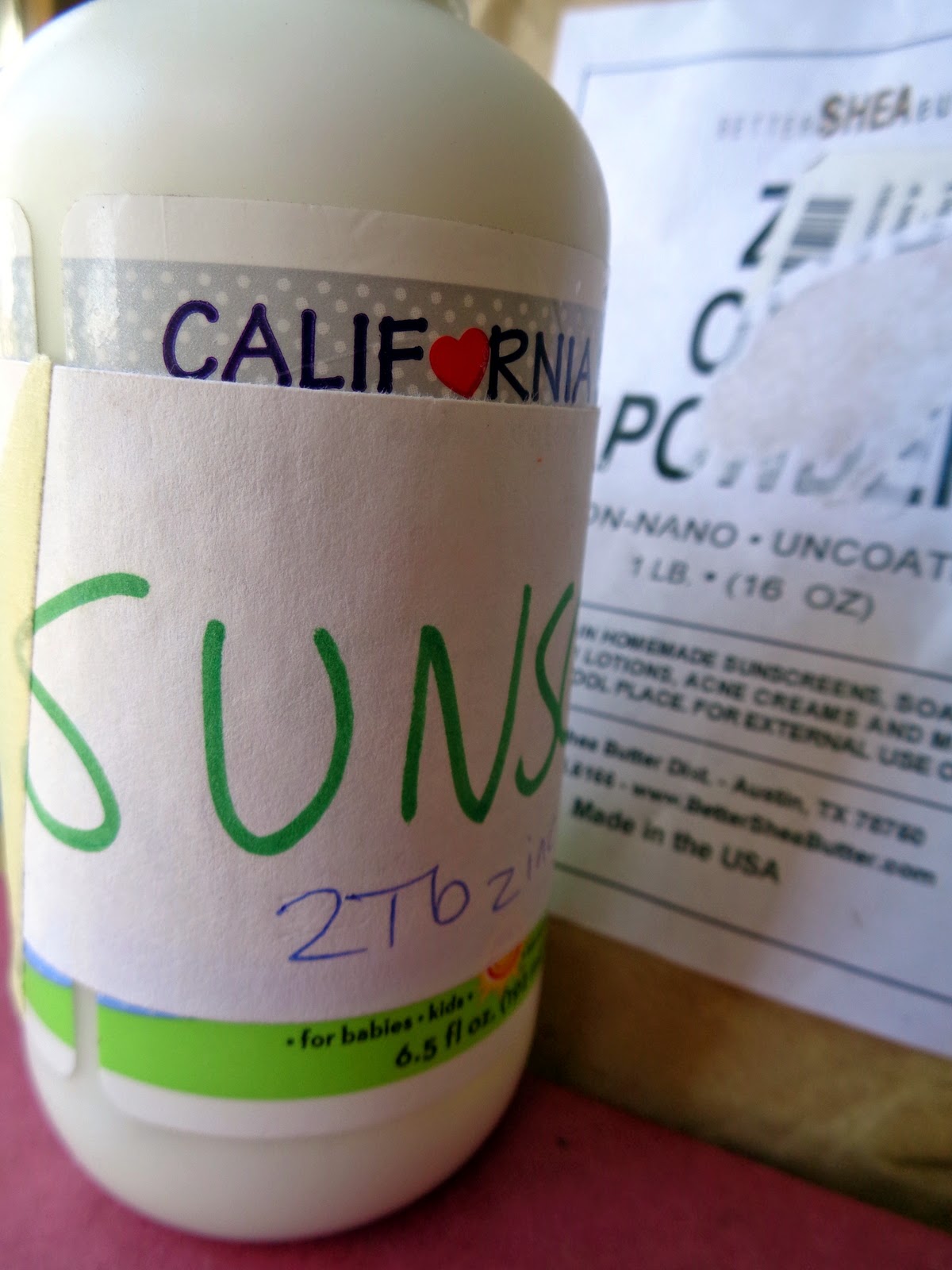 I don't know the equivalent SPF of this homemade sunscreen, but I do know that this keeps me from getting sunburned when I am outside for several hours. This sunscreen is not waterproof, so I will stick with my Badger Sunscreen for those times when I will be perspiring greatly or swimming outdoors.

I've blogged previously about the many wonderful uses of homeopathic Arnica in treating soft tissue injuries such as bumps and bruises, sprains and strains. For particularly strong injuries we do take Arnica pellets internally, but for very minor injuries I prefer to use Arnica lotion externally. 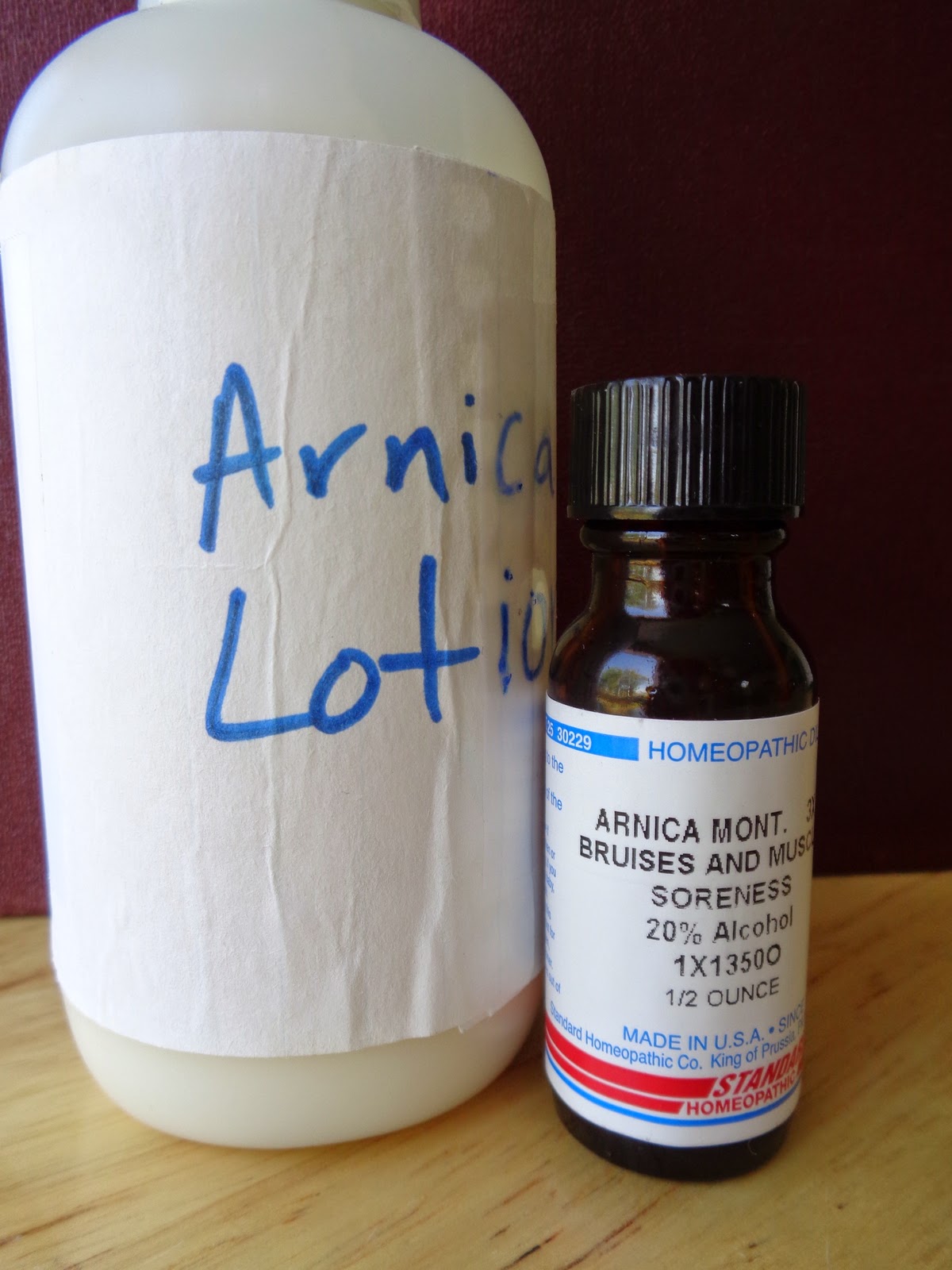 Because I was dissatisfied with the inactive ingredients in storebought Arnica lotions, last year I decided to make my own as follows:

Here in the desert, the mosquitoes arrive with our yearly monsoon season in July. I've always been one of those people who is highly attractive to mosquitoes, and I can be literally covered in mosquito bites in just a short time outside.  Sadly, I seem to have passed this trait on to my children as well. 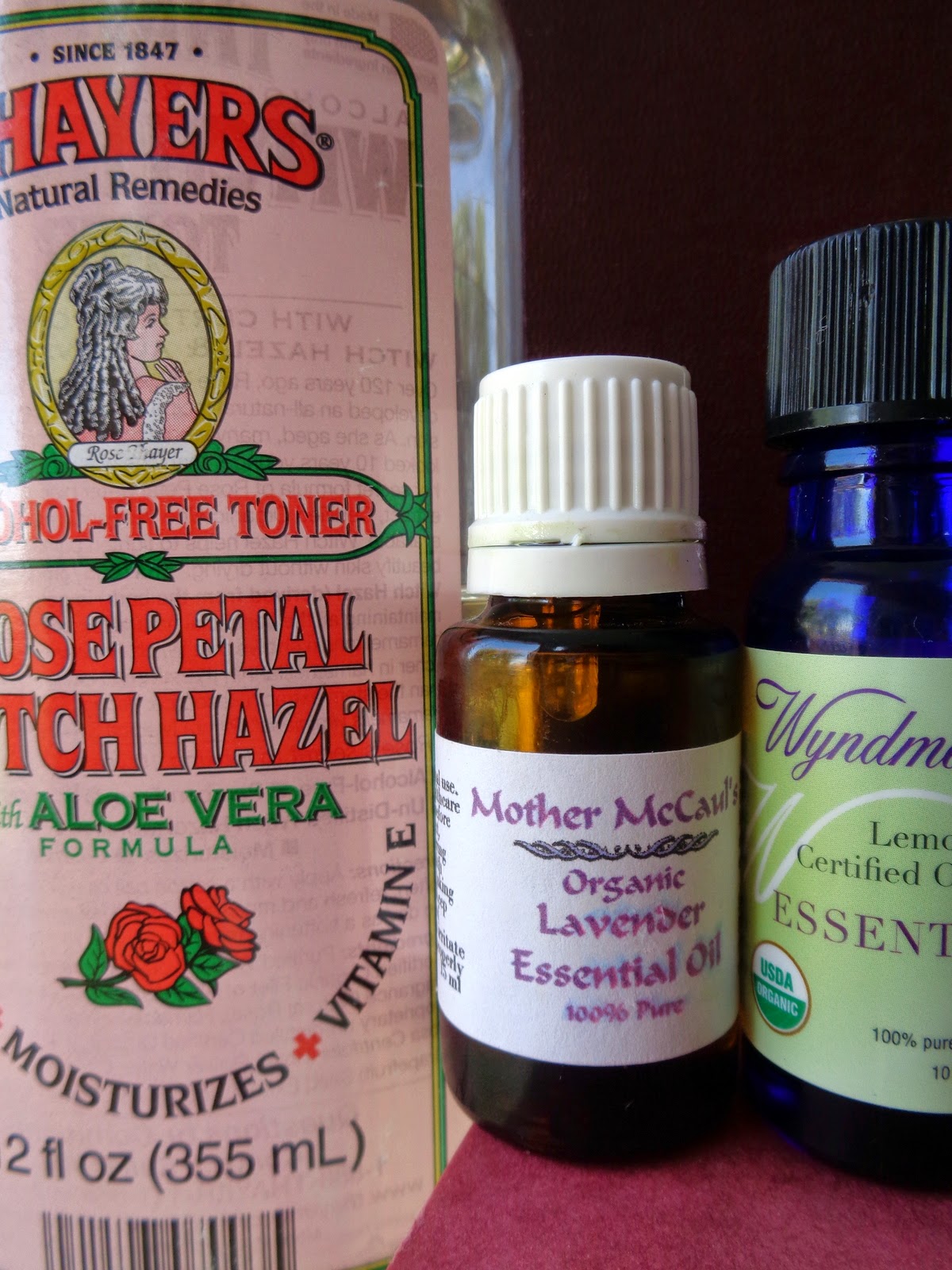 For several years, we used natural mosquito-repelling bracelets, and we did have some success with those (especially if we used multiple bracelets per person). However, the smell of those bracelets is so very strong and even leaves a taste in my mouth, so so I was still open to finding a better solution.

Thankfully, last year my sister-in-law passed on a recipe for homemade mosquito spray that is made with essential oils.   My family used this spray last year and found it to work very well so long as it is applied often.  It smells heavenly, so it is no chore to spritz myself and my children with it every 30-60 minutes when we are outside during mosquito season.

(This recipe is re-printed with permission from Camp Wander.)

What are your favorite sunscreen and mosquito-repellent products?

Home Birth is Safe and Healthy 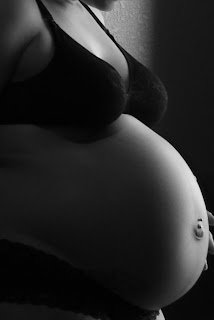 In planning to have a home birth for each of my children, the response I typically encountered from others was something along the lines of “what if something goes wrong?” or “you are really brave”. These responses underscore the fact that most people in our society have no idea that home birth is a safe option, and they certainly don’t think labor is something we are designed to handle naturally, without interventions or drugs. As an avid researcher of so many decisions in my life, it was surprising that people would think I was somehow being cavalier by deciding to have a baby at home, as if I was potentially sacrificing the safety and health of my unborn child.

In fact, home birth is as safe (if not safer) than hospital birth for low-risk women. A recent study of nearly 13,000 births was published in the Canadian Medical Association Journal [1]. There were three groups of women in this study: those planning home births with a registered midwife, those planning hospital births with a registered midwife, and those planning hospital births with a physician. Both groups of women that were attended by a registered midwife were attended by the same group of midwives; additionally, all of these women met the eligibility requirements for home birth, which means that women in both of these groups did not have any preexisting disease, significant complications of pregnancy (such as hypertension and gestational diabetes), or multiple fetuses, among other criterion. 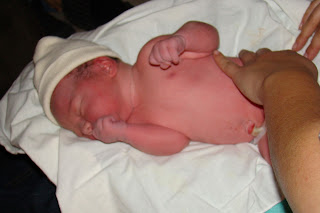 In the same study [1], women who planned to birth at home were also much less likely to have adverse maternal outcomes, such as 3rd- or 4th –degree perineal tears or postpartum hemorrhage. Additionally, newborns in the home birth group were less likely to have birth trauma, require resuscitation at birth, or have meconium aspiration.


All of these trends make it clear that mothers and babies in the home birth group were safer and healthier than those that planned births in a hospital.

This article is part of a series on home birth. For more about home birth, check out these articles:
Why home birth?
Natural birth is optimal and empowering
Home birth allows mothers the freedom to move
Home birth facilitates bonding and breastfeeding
Home birth works cooperatively with the Sphincter Law
Home birth is great for siblings

Are these home birth statistics surprising to you?  How was your birth experience?

New Traditions : How We Celebrate Birthdays

Back when we had only one child, we had the typical yearly birthday parties with lots of presents, food, and friends.  While this was enjoyable in some ways, once we had a second child I felt like the work that went into birthday parties was overly stressful.  Since our two children have birthdays just one month apart beginning shortly after the winter holidays (in February and March), followed shortly by my husband's birthday in April, the birthday festivities just felt like too much -  too many presents following so closely behind Christmas, too many festivities in too short of a period, and too many times that I felt burned out by it all. 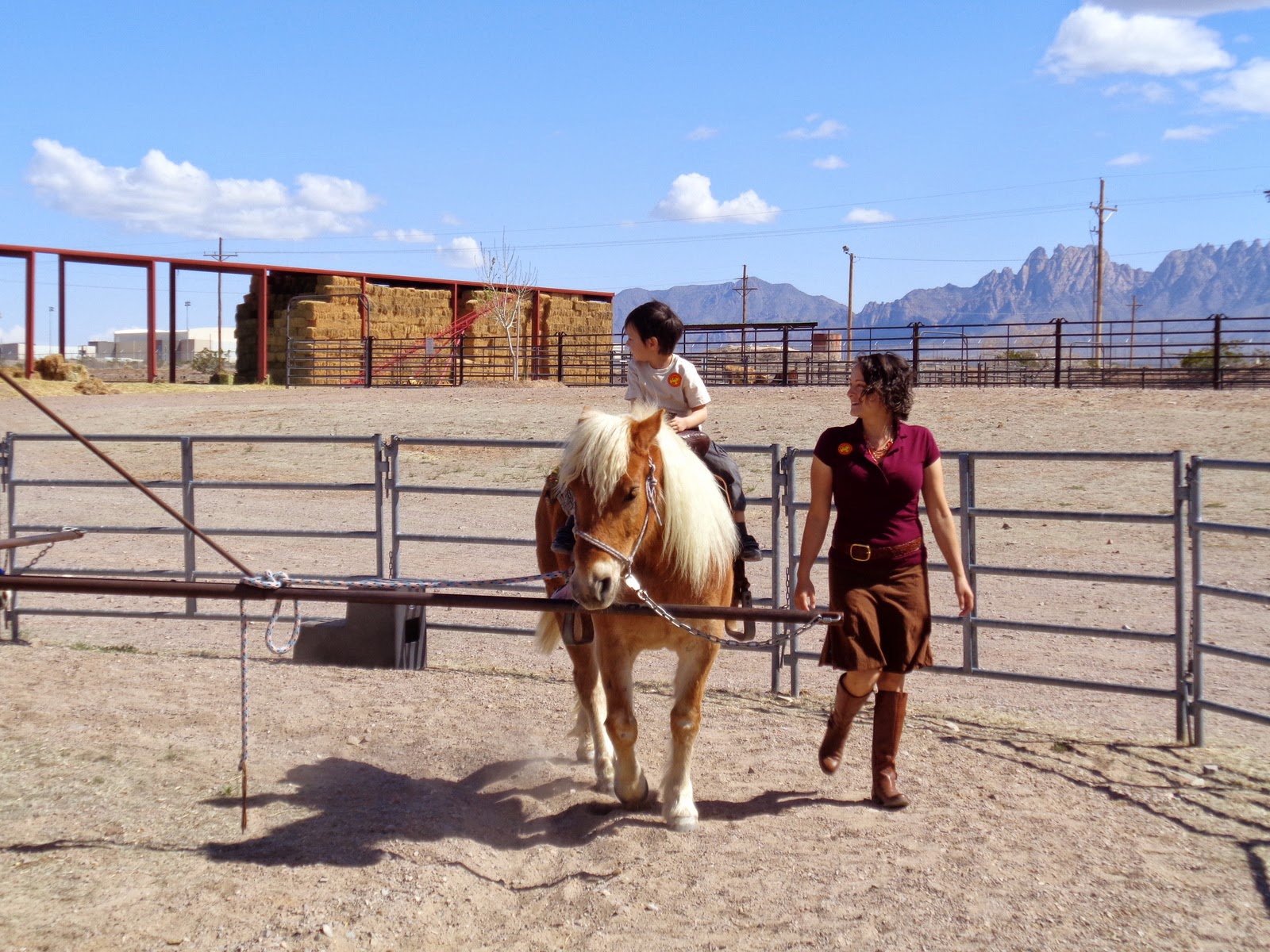 For their birthdays, each of our children selects a fun activity for our family-of-four that doesn't require driving very far. These birthday family trips give us a chance to spend time together in different ways, and they eliminate the stress of hosting birthday parties. Both of our children have thoroughly embraced the opportunity to choose these family outings. We schedule birthday family trips on weekend days so we can all participate.

Examples of some of our recent birthday family trips are: 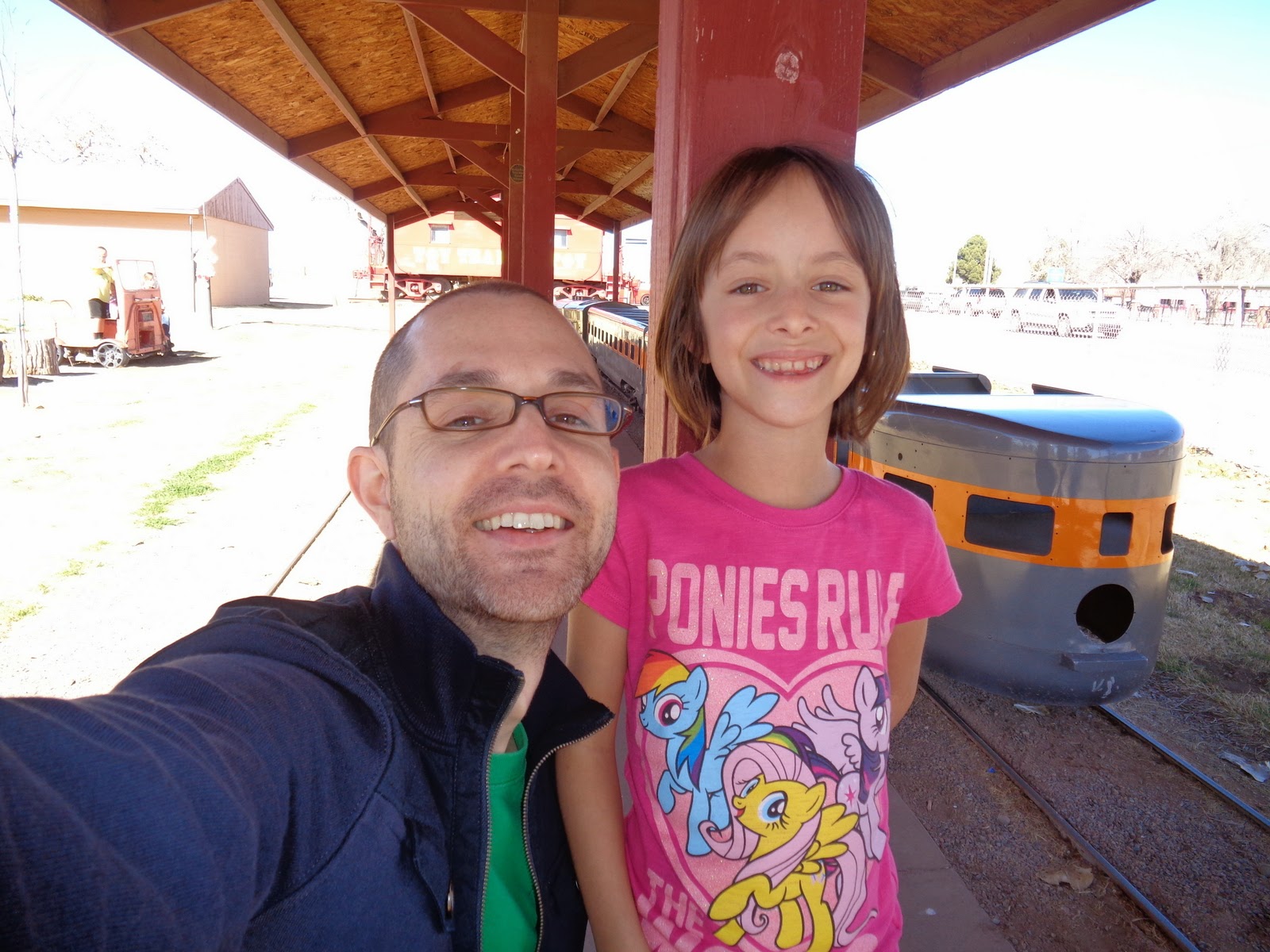 We have intentionally kept these family outings simple. We do not invite anyone outside of our household, and that allows our trips to be relaxed so that we can leave whenever we are ready instead of trying to keep to a specific time-schedule. We also typically enjoy a restaurant lunch as part of each birthday trip, so there is no stress over preparing or transporting food.

My husband and I do not buy the children gifts for their birthdays; instead, our family outing becomes their present. We do look for small, unique toys for the children during our family outings, such as the few colored rocks and marbles that caught their eyes at the Farm and Ranch Museum during our daughter's birthday trip. But we have intentionally shifted the focus of birthdays away from presents and onto creating family memories.

Of course, we don't deny the grandparents their rights to give the children birthday presents, but by eliminating the birthday parties we have much-reduced the volume of toys flowing into the house. Given the close proximity of their birthdays to Christmas, and the fact that our children tend to be happier with less toys (and have more strife when they have more toys), having less birthday presents is a very good thing.

In addition to the family outings on the weekend, on my children's actual birthdays I do some simple things to make the day special: 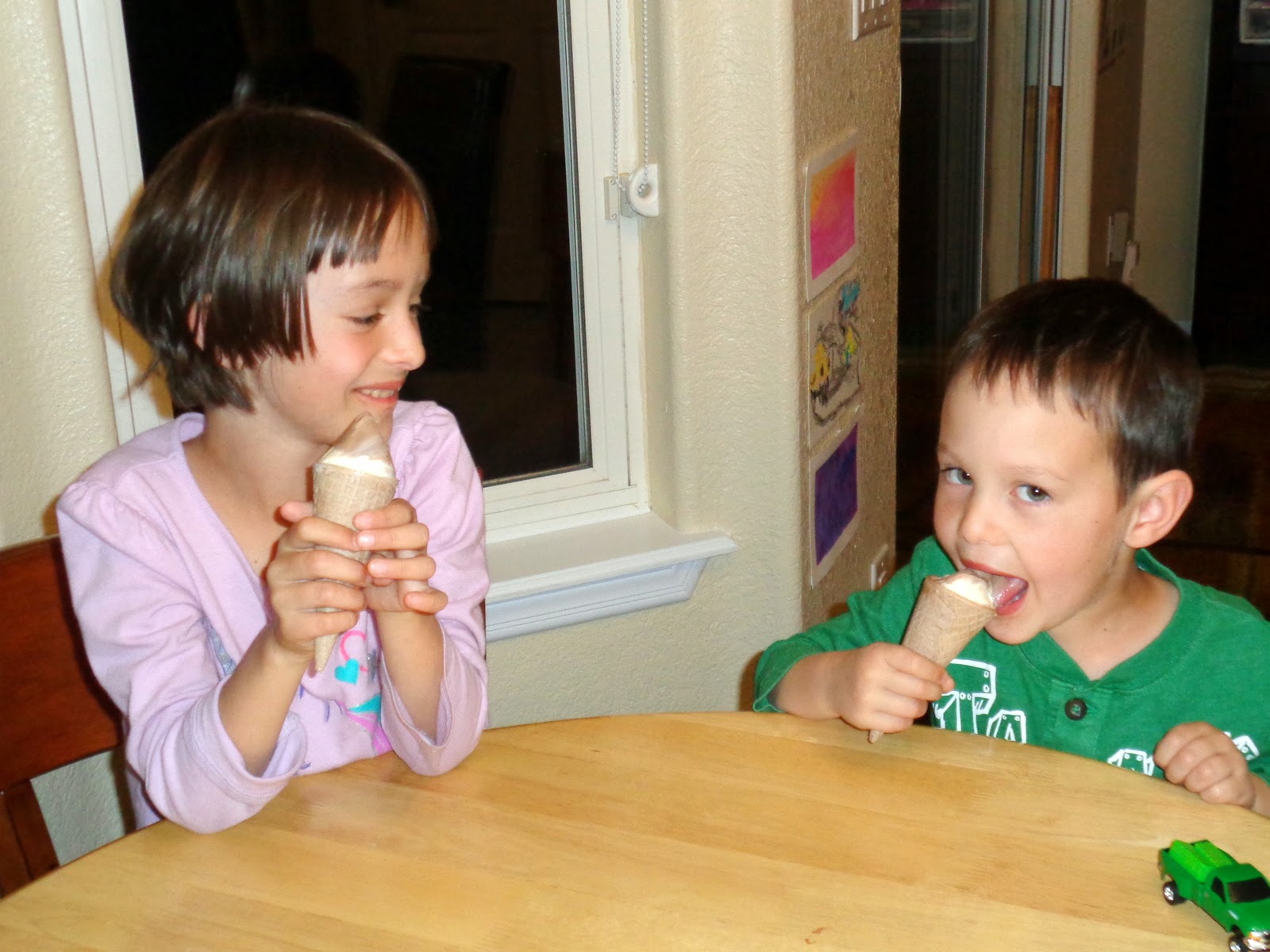 By breaking away from the traditional birthday parties, our family's new traditions allow us to spend time together, make fond memories, and enjoy each birthday.

Do you have any special birthday traditions?