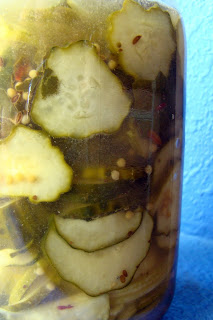 This recipe is my favorite way to use up the abundant squash and zucchinis at this time of year. And, you can even reuse the brine and spices for another batch once the pickles are gone.

Fermented Bread and Butter Pickles
Makes 1 quart
*Zucchinis and summer squash make great pickles too, BUT they will be soft instead of crispy.
**I buy Frontier brand mild pickling spice from the bulk section at the natural foods store.  If you can't find pickling spice, blog reader Brian has shared his recipe for pickling spice as follows:
Makes enough for 6 quarts of pickles


Links to Amazon are affiliate links. If you use these links, your price remains the same, but I earn a small commission. Thanks for supporting this site!
Posted by Sarah Smith at 6:00 AM

Hi, these sound wonderful! However, we have a severe milk protein allergy and can't use whey. What can I use in its place? I have veggie culture starter that usually use for my ferments. can I use that and would it just be 2tb like the whey? Thanks so much! Amy

I tried pickling with whey once and my pickles turned out mushy and not good. I'm scared to try again! Any ideas on why this happened?

I've had the same problem with most fermented pickle recipes. I think the difference with this recipe is that the vinegar helps the pickles stay crispy. Try it! They're not at all mushy.

Hi Amy,
Using a cultured veggie starter should work fine, although I've never used that method. From searching around, it looks like most of them come in packets, and you would use one packet for a quart jar. I hope this helps!

Thank you for the response! I will try it! We LOVE pickles!

I'm so excited to try this! My grandma has always made bread & butter refrigerator pickles. When I asked for the recipe, it called for 2 cups of sugar, and I couldn't bring myself to make them. These sound like they'll satisfy my pickle cravings. :)

How long would these last in the refrige?
Thanks, Betsy

Since they are fermented, they should actually last indefinitely. I've had no problems with having them for several months in the fridge.

These pickles sound wonderful- they remind me of something we had as kids - my mom would make pickles of all kinds. How thick did you slice your cucumbers? We got a bunch of organic cucumbers at the farmer's market today, and I so want to make these in the next day or so. I have fresh kefir whey in the fridge just waiting...thank you for sharing, Ina

I slice them fairly thin; less than 1/4-inch thick. I hope you like the recipe!

This recipe makes great, crunchy pickles! Although I do have to make 1.5 recipes to fill the one qt. jar. I just made my 2nd batch, this time I put in zucchini, celery and carrots as well as cucumber.

When I make cultured pickles using whey, I also add a few grape leaves. The tannins keep the pickles crisp. Some black tea would also work but may alter the taste of the pickles. I am lucky to have a few wild grape vines growing in my back yard.

It could also be that the cucumbers were too old. The sooner you get them to fermenting once you've picked them, the crispier they'll be, my experience. Two-three days is tops for delaying. If you're trying to ferment store-bought pickles, choose those that are grown locally and freshest, and as Lucy said, toss in a few grape leaves.

I'm in the same boat and cannot use whey, can anyone recommend a vegetable starter that is tried and true?

Is there a way to make these without the whey?

You could try using some dairy-free vegetable starter instead. Here is one such option:
http://www.culturesforhealth.com/caldwell-starter-culture-for-fresh-vegetables.html

What about using fermented sauerkraut juice instead of whey? I got mine from the Amish.

I bet that would work just fine!

WOW, the only problem I had was I didn't make enough! These are delicious and easy to prepare using ordinary salad cucumbers (organic, of course). Thanks for the recipe!

The cultures for health veggies starter works, so does the whey from dairy free yogurt (if you happen to make coconut/cashew/almond yogurt yourself) sauerkraut juice works too, as does a little bit of water kefir. I have tried them all and they have all worked beautifully in this recipe! :) And once you got one batch going, just use a little of the last batch of cukes for the next one!

Yes, add wine leaves, oak leaves or horseradish leaves for crispy pickles :)
In addition as mentioned already, make sure they are as fresh as possible and also make sure that the blossom end is cut off. Leaving that on can sometimes lead to mushy pickles too!

I have made this recipe several times and there is not problems with using whey. They turned out marvelous every time...and are super crunchy!

I have made your recipe several times but the amount of liquid per quart is never enough. Do you ever have this problem? I make my slices chunky so maybe there is more airspace.

By the way, these are AMAZING!!!

I'm glad you like them!
I never have that problem with the amount of liquid; I just mash my cucumbers down very firmly to get them into the brine. You could always increase the amounts a bit if you feel like you need more liquid.

Darn! It just lost my post 8-( Will try again and use another profile.
I love this recipe and have used it many times. Your update is interesting, as I had already discovered it wasn't necessary to soak the cukes. I do use the grape or oak leaves as they grow wild in my yard. I've discovered that if I slice up a straggler cuke from the garden and add it to the brine after I eaten most of the pickles, they are delightfully crisp and flavorful after a few days in the frig. I don't bother with bagging the spices, as I like to eat the mustard seeds if they are stuck to the pickle slices. I've also learned to use the brine for other purposes - in my morning green drink for flavor, or in a salad dressing. No need to throw away that good flavorful raw honey/ACV brew!

Thanks for sharing your experiences, Kris!

Can you use English cucumbers? Up here in the North we still don't have fresh cucs. However, we do have someone at the farmer's market who grows hot house english cukes. I can hardly wait to try this recipe.

Considering that this recipe works just as well with any summer squash, I would presume it should work well with English cucumbers too. The only thing I'm not sure about is how crispy the pickles would be, but I have used a variety of other types of cucumbers and the pickles have always been crispy. If you try it, let me know how they turn out!

I LOVE this recipe...it is so delicious!...but I too have to use more than 1.5 per jar.
This is absolutely wonderful with sweet banana peppers! I slice rings and use the same mixture!