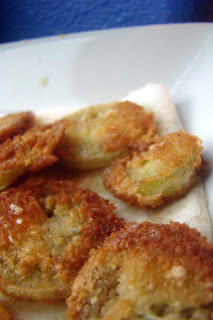 As summer draws to a close, it is time to harvest green tomatoes before they freeze.  My favorite way to eat green tomatoes is battered and fried.  With a little experimenting, this year I learned how to make them grain-free and delicious!  Everyone in my family gobbled them up.  The hardest part is not eating them all straight out of the pan.

This post is part of Fight Back Friday at Food Renegade, Pennywise Platter at The Nourishing Gourmet, Real Food Wednesday with Kelly the Kitchen Kop, Fat Tuesday at Real Food Forager and Monday Mania at The Healthy Home Economist!
Posted by Sarah Smith at 6:00 AM

I thought fruit had to be fully ripe to be GAPS-legal. Green tomatoes would still have disaccharides, wouldn't they?

Soliloquy - In the GAPS book, tomatoes are listed under the heading "non-starchy vegetables". So I think they are fine to eat green (even though they are technically fruits, as you pointed out).

Hmm, yes, gastronomically they are a vegetable. I would caution anyone that still needs serious healing not to eat them green. As a fruit, they will contain starch and other disaccharides before they are ripe. As they ripen the carbohydrates change and avoiding those specific carbohydrates is so important to people with GAPS.

Thanks for linking your great post to FAT TUESDAY. Hope to see you next week! Be sure to visit RealFoodForager.com on Sunday for
Sunday Snippets – your post from Fat Tuesday may be featured there!

Thank you for responding - I now feel like I have "permission" to use refined, which I can buy at walmart. Yay for my wallet. And tastebuds. :)

Yesterday I wanted to make GAPS-friendly chiles rellenos...thought your idea of egg dip and coconut flour would do the trick! Unfortunately I found I had no whole chiles but only coarsely chopped ones in the freezer...so I just dipped spoonsful of them into egg, then into coconut flour and fried them in ghee. After turning them I topped it with cheese to melt on top. Wunderbar!