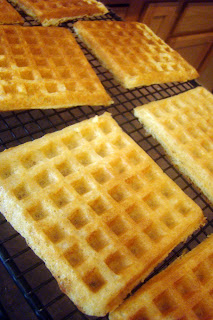 Years ago, I made freezer waffles from soaked spelt and soaked oatmeal.  Now that we avoid gluten and try to limit most grains (since they can cause behavior problems in our daughter), I developed a new freezer waffle recipe based on millet, arrowroot, and coconut flour.  Even though I use whole millet in this recipe, a grain grinder is NOT required as a blender works wonderfully to grind the millet.

These waffles hold together well and can be warmed in the toaster oven or toaster.  Like most freezer waffles, they need to be watched carefully to make sure they don't burn. I've given recipe amounts for the both the huge batch that I make as well as a smaller amount in case you want to start with less. 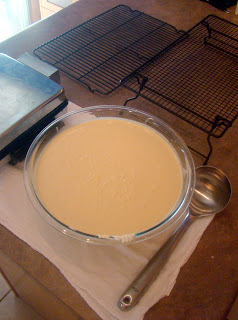 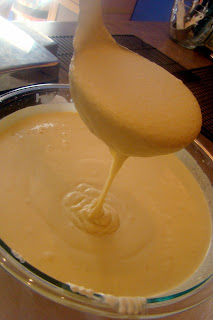 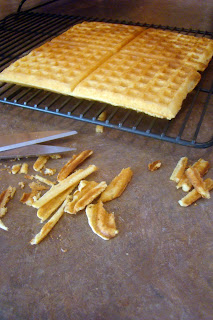 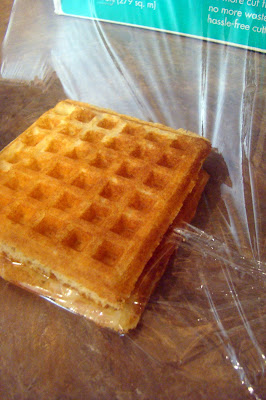 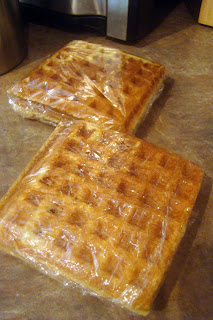 yum. I would pin this if you had a pin it button. I would like to try it.

Oh, thanks for this reminder! I used to have a Pinterest button, but it disappeared recently and I've had trouble getting it back because Blogger changed some things around. I'll work on it some more.

Nope. Just spent two hours trying to get it to work, but I can't get it to show up properly.

Wow, these look amazing!! I hope I can make these once I go back to grains.
Just one note of caution: don't eat to much millet. It is goitrogenic. Read here:
http://www.thehealthyhomeeconomist.com/beware-of-millet/
Have you tried sorghum? I used to love using it in my GF baking. Delicious and very similar to wheat.

Wow, thanks for the link! I had no idea millet was goitrogenic. I think we are likely fine, as besides a waffle a time or two each week, we don't typically eat any other millet. But I'll keep this in mind!

Wow these are great! I usually make small batches for new recipes but took a leap of faith here and made the big batch since my 18 month old loves all things sour. I thought these would last a while but my husband, who cringes every time I break out the kefir, loved these! Also I soaked the whole grain millet for 5 days, then blended it. It was fermenting gargoling goodness. Glad I went big!

Hooray, thanks for letting me know! I was wondering if anyone would be brave enough to go big!

These look great! We don't have a waffle maker, do you think they would also work as pancakes?

Yes, they should work as pancakes, too! You might want to thin the batter a little with more milk to get your desired consistency.

Thanks Sarah! I'll try to find time in the next few weeks to give them a try. I'll let you know how it goes! I love the ingredient list and think my babes will love them.

What size waffle maker do you use? The small batch only made 6 sets of waffles for me.