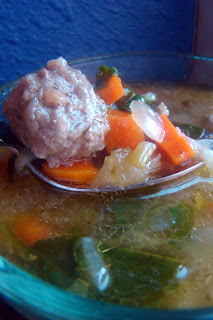 Meatballs, veggies, and yummy broth: Italian wedding soup is one of our favorite soups. The meatballs are so tasty, and lightened with the addition of grated veggies instead of the typical breadcrumbs.  The kids are always excited whenever they see me making meatball soup!

Meatballs:
Soup:
*I love to use vermouth, as it doesn't go bad like unused wine. Vermouth is shelf stable, can be used in place of dry white wine in cooking, and can be stored at room temperature indefinitely.
Posted by Sarah Smith at 6:00 AM 10 comments: 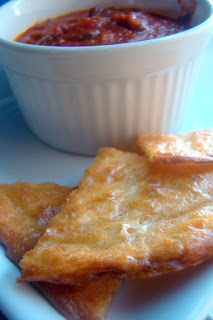 My family was so excited by this Cheesy Bread that they requested another batch immediately after dinner! My husband proclaimed that I had "created something magical", and this recipe really did turn out amazingly delicious. Cheesy Bread is great by itself, served alongside soup, dipped in your favorite marinara, or even as the base for an open-faced sandwich.  It refrigerates well, too, and can be warmed up very quickly in a toaster oven. 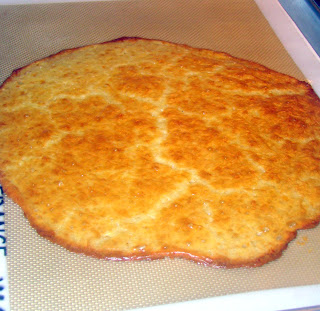 Cheesy Bread
Makes enough for 4 people as a side dish, but don't be surprised if it gets completely gobbled up by even less people
*Arrowroot is not GAPS-legal.
Posted by Sarah Smith at 6:00 AM 20 comments: 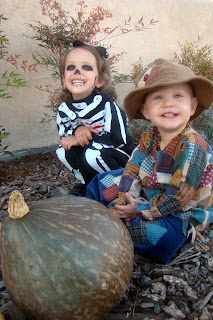 This is an updated version of a post from October 2011.
Although we've never allowed our kids to have much candy, Halloween is still a holiday they greatly enjoy.  Pumpkin carving, costumes, and trick-or-treating! This will be our third Halloween while on a (mostly) grain-free diet, so I thought I'd share some ideas for avoiding candy overload.  With all of these options, make sure you talk to your kids in advance of Halloween so they know what to expect. 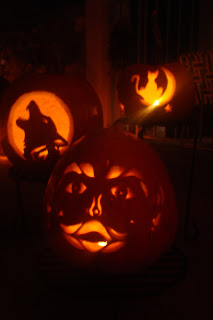 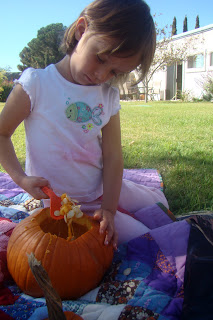 Do you have any ideas for limiting candy on Halloween?
Posted by Sarah Smith at 6:00 AM 5 comments: 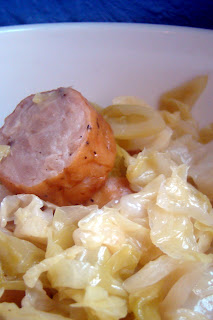 Braised cabbage and sausage is so simple to prepare, yet so satisfying.  The cabbage gets cooked down nicely in broth and apple cider vinegar, and it pairs so well with sausages. My family really enjoys this dish.

Braised Cabbage and Sausages
Serves 4
*My homemade chicken broth includes a bit of chicken fat.  If yours doesn't, you may want to add another tablespoon of butter.
**To make this GAPS-legal, make sure the sausages don't have any added sugar, MSG, or other GAPS-illegal ingredients. We eat Applegate Organics Chicken and Apple Sausages, which don't have any GAPS-illegal ingredients. Nonetheless, you should probably only consume processed meats occasionally while on the GAPS diet.
Posted by Sarah Smith at 6:00 AM 5 comments: 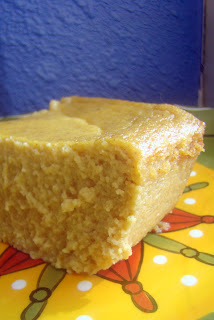 With the arrival of Fall, I was craving a nicely-spiced breakfast, and this fit the bill!  Smooth and creamy, just spicy enough, and with a pleasant tang from the applesauce. This applesauce spice custard cake makes a great breakfast, and it could easily be dressed up for dessert with some vanilla ice cream or whipped cream.

Applesauce Spice Custard Cake
Serves 6 generously
*The coconut flour will need to be sifted if you are not using an immersion blender.
Posted by Sarah Smith at 6:00 AM 21 comments: 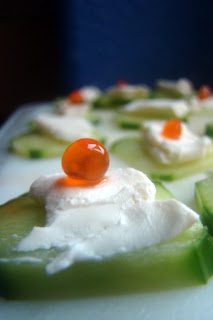 Roe, also known as fish eggs, are wonderfully healthy and nutritious.  They are a superfood, and loaded with vitamin D.  Salmon eggs are a lustrous orange color, with a salty, tangy taste.  They pair wonderfully with cucumbers and cream cheese! What a quick, delicious dish.

Some people in my house are not as adventurous as others, so I leave a few cucumbers without the roe on top.  Then I serve them all together and everyone can pick what they like.  My 2-year-old son, who is not very fond of raw veggies yet, likes to just eat the cream cheese and roe off the top.  (He and I particularly love roe.)  This method also gives my 5-year-old daughter the opportunity to see us enjoying the roe, and even try some herself occasionally without any pressure. 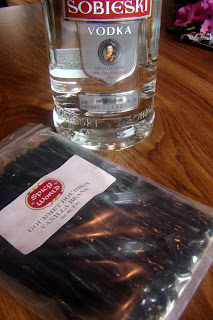 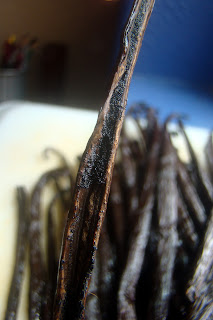 That's less than half the price of storebought vanilla extract!

Choice of Ingredients
Vanilla extract is traditionally made with vodka, and that is all I've ever used.  But some people prefer to use other alcohols, such as rum.  The FDA standard just calls for a minimum of 35% alcohol (which would be 70 proof).

There are also different types of vanilla beans.  So far, I've only used Bourbon vanilla beans, but there are also Tahitian beans (which I think are a little bit smaller than Bourbon beans). Feel free to experiment to see what flavor you prefer.

How Long Does it Take?
Once you combine the alcohol and vanilla beans, you need to let it sit for at least a few months before you start using it. Six months is even better. If you want to make some for the December holidays coming up, you'd better get started soon!

Recipe: Homemade Vanilla Extract
This recipe will make a LARGE amount of vanilla extract.  Why make a small amount when you could make a large amount and have enough to last a good long while? 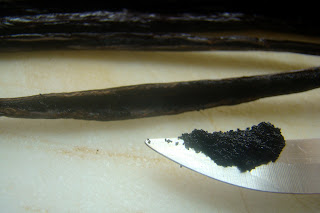 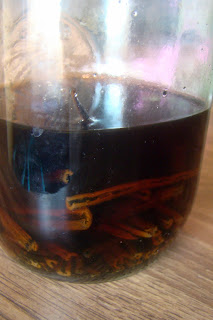 Is White Rice Better Than Brown Rice? (including a recipe for nutrient-dense white rice) 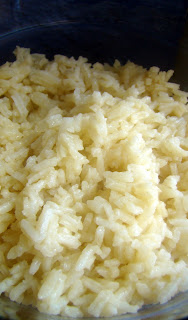 White Rice versus Brown Rice
Previous to our GAPS diet, my family ate grains that had been traditionally prepared, such as brown rice that had been soaked before cooking to remove anti-nutrients.  Now that we are transitioning off the GAPS diet, we have found white rice to be much easier on digestion and less problematic overall than brown rice. Brown rice seems rather hard to digest, and it can bring back some of our old complaints (like my joint pain).

It took a bit of a mental adjustment for me to be willing to consume white rice.  Weren't all of the health benefits lost through the removal of the bran and germ from the rice? One conflicting opinion that I trusted was from Chris Kresser, an integrative medicine practitioner who is generally amenable to grain-free/paleo diets.  In his Personal Paleo Code, Chris writes that,


"Studies that have compared the amount of nutrients actually absorbed from eating white and brown rice have shown that humans absorb more nutrients from white rice.

Why? Because the “antinutrients” in brown rice...- like phytic acid - interfere with the absorption of the nutrients it contains. White rice doesn’t have that problem.

This is why I believe white rice is an acceptable food, and my experience with patients suggests that it is generally well-tolerated.

...White rice is safe to consume without any preparation. Whole rice is preferred, but rice noodles and other rice-based products are permissible in moderation."

With my adrenal issues, I have found that consuming white rice and potatoes in moderation really helps with my energy levels. By itself, cooked in water, I find white rice to be rather bland.  How strange that I am now having to acquire a taste for a refined food after years of eating whole foods! To make white rice taste better and even more nutritious, I like to cook it with pastured butter and homemade chicken stock. 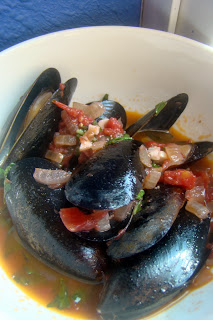 Mussels are a relatively mild-flavored seafood.  They pair wonderfully with red wine and some of the remaining garden-fresh tomatoes and basil.  Mussels are amazing nutritionally since the whole "animal" is eaten!

I cooked a quick lunch of these mussels in red wine sauce last week for myself and the kids.  My 5-year-old was skeptical (she's unfortunately reached the age of being suspicious of new foods, and especially anything too "chewy"), but I prepped her ahead of time not to make a big deal about it since her little brother will follow whatever he sees her do.  Her 2-year old brother and I loved this dish.  My son ate 8 mussels on his own!

I must admit that we enjoyed this with a few pieces of toasted, buttered crusty sourdough bread (which we buy from a local bakery once every few months as a treat). The juices are just so good to sop up with the toast.  But this dish would also be great without the bread, just eaten as a soup.

This recipe was based on one from Gorging Gorge, but I did make a few changes to the recipe.

Mussels in Red Wine Sauce
Serves 3-4
*I don't have access to fresh mussels where I live. If you can get fresh mussels, feel free to use them!  You'll just need to increase the cooking time by about 5-7 minutes.
Posted by Sarah Smith at 6:00 AM 3 comments: