Promoting a Positive Body Image in My Daughter

This post is the second in a series about positive body image.

I think there is way too much emphasis in our culture on physical appearances. Already overly-thin
models are airbrushed to make them look even thinner and yet with larger chests. Normal events such as aging take on a dark cast, as we are told again and again that the normal processes of aging such as wrinkles and gray hair are not okay. It would be a rarity for a girl to grow up in this culture and feel completely content with her own appearance. 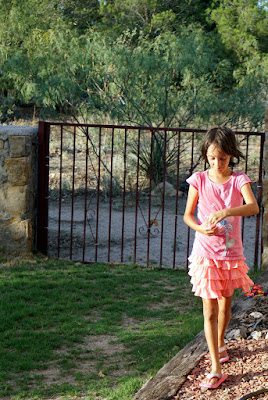 Having grown up with my own insecurities about my appearance, I want things to be different for my daughter. She is now 9 years old, and just coming up on the age when I first became self-conscious about my own body. I want her to accept herself as she is, to not be overly fixated on her appearance or judge herself as inferior just for looking the way she was made. I may not be able to prevent appearance-related insecurities altogether, but I'm certainly going to keep trying to make it happen. This post is about the steps I'm taking to allow my daughter to grow up feeling content with her appearance and yet not overly focused on her appearance.

Don't Focus on My Daughter's Appearance

One of the most basic ways I am teaching my daughter to not be overly focused on her own appearance is by not focusing on her appearance myself. I'm sure I have told my daughter she is pretty perhaps a handful of times in the 9+ years of her life, but this is not something I comment on regularly with her. In her book Strong Fathers, Strong Daughters, Meg Meeker MD writes about the damaging effects of focusing on a girl's appearance. When we repeatedly focus on our child's appearance (whether through positive or negative words), the child gets the message that their appearance is very important, and that their intrinsic self-worth is related to their appearance. This kind of thinking can be a huge factor in the development of eating disorders. I choose not to propagate the message that physical appearance is important with either of my children, instead focusing on traits such as honesty, kindness, and perseverance when I want to praise them.

Don't Talk About My Own Appearance in a Negative Light

For good or bad, whatever my kids see and hear me do repeatedly, they will be likely to do themselves. If I talked abut my own body and appearance in a negative tone, I would likely start to hear my kids do the same. I have seen this happen numerous times with mothers and daughters: mothers who frequently berate their own appearance have daughters who do the same. I purposely do not talk about my own appearance in a negative light. This benefits my own self-esteem as well as my daughter's.

Limit Media and Exposure to Commercials

Our society's preoccupation with appearance can be seen very clearly in video media, internet ads, and especially commercials.  Through those outlets, we are clearly told that we need to correct ourselves to look more like the "beautiful" people, through things like hair-dying, anti-aging products, dieting, tooth whitening, and the like. Repeatedly exposing ourselves to those messages serves to undermine any attempts at being content with ourselves and our appearance.  I purposely limit my children's (and my own) exposure to these influences so that we do not become overly preoccupied with our looks or judge ourselves harshly.

Guard What is Coming Into Our Home

Even checking the mail afforded opportunities for my children to become overly focused on appearances. A few years ago, I ordered undergarments from Victoria's Secret, only to then start receiving catalogs in the mail on a regular basis which were filled with images of scantily-clad, overly thin models. Something inside me revolted when my young daughter went to check the mail and returned carrying a VS catalog, which of course she had looked at on the way back from the mailbox. So I searched for the not-easy-to-find place on their website where I could unsubscribe from all mailings, and I will have to do so again in the future if I ever order from them again.

One of the unfortunate aspects of the school environment is the focus on appearances.  During my own childhood, I remember kids at school (including myself) becoming overly focused on appearances and what others were wearing. Kids were teased for looking different or for wearing clothes that weren't "cool". This would likely be exacerbated nowadays with the current bombardment of appearance-related images and videos that we can all be exposed to.

While this is not the primary reason that I homeschool, it is certainly an added benefit that my kids are not being exposed to the school culture that includes such a high focus on appearances. My kids do have friends that they socialize with regularly at homeschool group activities, but I've never heard any of the kids talking about appearances in a negative light. The closest I've seen to any focus on appearances was one child admiring another's shirt.

As we go about our normal lives, opportunities arise when I can talk about body image with my children.  I purposely take time to discuss this with my children at those times. For instance, in reading the Little House series by Laura Ingalls Wilder, we talked about how absurd it seemed that as a young girl Laura was jealous of her sister Mary's blond hair. In the later books, as Laura moved into young adulthood, she complained of her own appearance and longed to be more long-and-lithe like some of her friends.  My children and I discussed this, as well. 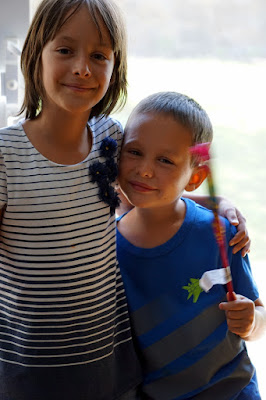 In these discussions, I make the point that there are things that we can change about ourselves and there are other things that just are as they are.  For instance, we can work on learning to control our tempers, on learning to persevere when things get tough, and on choosing to serve others instead of ourselves.  But the overall shape of our bodies, the color of our hair and eyes, the color of our skin: these are things that are just part of how we are made, and choosing to be dissatisfied with those is pointless and can even be damaging. My hope is that these discussions will help my children keep a healthy perspective on themselves as they grow older.

My goal in all of this is to help my children be content with themselves, and to learn that there are much more important things to focus on than their appearances. There may be more challenges to this as my children grow older, but with this foundation laid I hope that they will have a more positive experience in adolescence and early adulthood than I had myself.  I will continue to find ways to promote positive body image and less focus on appearances as the years go on, because I think this is an important aspect in teaching my children to be kind to themselves and others as they mature.

Do you have any tips for promoting a positive body image in children? Or have any experiences to share?

Hi Sarah,
Thanks for this blog. We also homeschool our 5 children and body issues is definitely something that has come up. One way we've broached the subject is by purposely watching movies where things like this come up (which is pretty much all movies from Hollywood). But with a pair of critical parental eyes and some serious dialog, including stopping and restarting th movie ad nauseum, we've had some good discussions with the children. It's becomes an art to point out, say, how Angelina Jolie, Megan Fox and Kiera Knightly all hold their mouths in a pout and their eyes in a squinch to look like they are in control, like they are powerful, beautiful and that nothing phases them. The truth is, they are terrible self conscious, have had plastic surgery and have turbulent personal lives! (just as an example).

Being in homeopathy oursevles, you and I have good knowledge of how "low self esteem" is a treatable pathology, much like depression or colitis! When children (and even adults) are under supervised homeopathic care, their outlook and perspective on life improves greatly. I'd add the a healthy dose of participation from the parents is necessary.

Self esteem starts with how the parents view themselves. If the Mother (especially) isn't comfortable with her own appearance, especially without makeup, then the daughter will have doubts about her own unaided appearance. When dad looks at mom like a china doll and makes comments about good looking women, women who are fat, and keeping in shape, then sons will do the same and daughters will try to be what daddy wants.

And, one more thing. People who are "beautiful" or who think they are, are usually the most unhappy and unsatisfied people because they hinge their self esteem on their looks. in the end, there's nothing there. They have been ineffective human beings and have nothing to show for their time on earth. Doing & being something meaningful is always the best!

One more "one more" thing!! When dating, never make yourself up too much. Don't ever drink or use drugs or do anything else that alters reality. When you do these things to begin a relationship, then the relationship isn't based on reality but instead, an illusion. These will never end well.

Hi Christina,
Thanks for your thoughtful comment! I love the points you've made, and agree wholeheartedly with your conclusion about the higher importance of doing and being something meaningful. I feel like that is such a lost idea in many ways, as people are being led to think that job training is the highest aspiration of education, and that appearances matter to such a high degree. Our society as a whole would benefit so much from shifting the focus instead onto the development of character and virtues alongside finding truly meaningful work that benefits humanity while also fulfilling personal mission.