Healing Chronic Constipation in an Infant


When I met 11-month-old Stephen*, I was struck by his easy-going personality.  He entered my home with a smile on his face, and was ready to explore his surroundings. Right away, Stephen started playing with toys and was content while I talked with his mother Melanie for nearly an hour.

Stephen was largely breastfed, but had started some solid foods at the age of 9 months old.  For the last 2-3 months, Stephen had been severely constipated, only having a bowel movement once a week, and doing so with much straining, screaming, and even some blood. Melanie had tried everything she could think of: doctors, chiropractic treatments, and dietary changes.  But Stephen's constipation persisted despite all of these efforts.

Melanie contacted me to see if there were any homeopathic remedies that might help Stephen. I've been studying homeopathy for nearly two years now, and actively working on homeopathic cases for the last 6 months, so Melanie was referred to me by a mutual friend.** I was happy to guide her in finding a remedy to help Stephen.

How Remedies are Selected 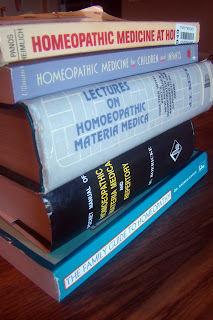 I use classical homeopathic methodology to aid in the selection of remedies. There are many different homeopathic remedies that can help with constipation, but what sets homeopathy apart is that remedy selection must be individualized for each person.

In classical homeopathy, the goal is to find a single remedy that matches the totality of a person's symptoms.  Thus, classical homeopathy takes into account much more than just the main complaint (which in this case was constipation). Symptoms relating to the physical body are just one part of the total symptom picture; understanding the totality of symptoms must encompass mental and emotional symptoms as well.

The total symptom picture is used as a guide to point to the correct homeopathic remedy. Each remedy is well understood in terms of what specific symptoms it can affect. Each remedy has its own set of very specific symptoms (as defined in homeopathic repertories), and even its own personality (as defined in homeopathic materia medica).  In chronic cases such as this, the homeopath strives to match up the total symptom picture and personality of the person to the remedy.

In selecting a remedy for Stephen, I sought to understand the total picture of his symptoms and personality. 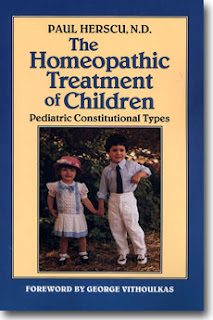 Based on Stephen's total symptom picture, I chose the Sulphur homeopathic remedy. Sulphur closely matched Stephen's constipation symptoms (although not quite as specifically as some other remedies), but it especially matched his personality.

In "Homeopathic Treatment of Children", Paul Herscu describes the "happy-go-lucky, smiling type" of Sulphur child.  This child has a "winsome personality" and is "curious".  This type of child also may "kick and fight any time a parent tries to change the diapers. They may likewise to bathe and will put up a fight until dragged into the bathtub; then they often love it."

Sulphur is also a well-known homeopathic remedy for skin eruptions of all kinds, including the red anus, dry red skin, and diaper rashes that Stephen exhibited.  I told Melanie about Sulphur and how well it matched Stephen's overall symptom picture and personality. She decided to give it a try. 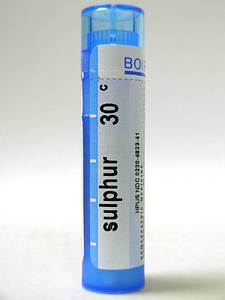 Stephen reacted very well to homeopathic Sulphur 30c. In fact, with just a few doses, he had a non-painful bowel movement for the first time in months. At that time, I recommended that Melanie watch-and-wait before giving any more remedy.

Ideally, homeopathic remedies are given only as often as needed, and not more than needed. The general rule of thumb is that, whenever there is obvious improvement, watch-and-wait to see if any more remedy is needed (as indicated by a plateau in healing or by any regression).

In addition to the dramatic healing of Stephen's constipation, he has also experienced other significant long-term improvements: Stephen no longer has dry, red skin and he has stopped fighting about having his diapers changed.  The correct homeopathic remedy, chosen individually to match the totality of symptoms, can be amazing!

*This is a true story, but I have changed the names to protect privacy.
**I am not a physician or licensed healthcare practitioner. The information I provide is intended to educate, and should not be construed as a prescription.


Links to Amazon are affiliate links. If you use these links, your price remains the same, but I earn a small commission. Thanks for supporting this site!

Very interesting post! I'm interested in learning more about homeopathy. Any suggested books or resources to get me started? Is Paul Herscu's "Homeopathic Treatment of Children" a good place to start? Thanks for your blog. I've it enjoyed it and learned much! My family and I enjoy your recipes too.

Some good books to start with would be:
Family Guide to Homeopathy by Andrew Lockie
Homeopathic Medicine for Children and Infants by Dana Ullman
Those are both great for giving good information about using homeopathy to treat a variety of acute ailments (such as colds, flus, teething, etc)/

And then if you want a good book to start with for learning more technical, in-depth info about homeopathy, I would recommend The Science of Homeopathy by George Vithoulkas. The book by Herscu is wonderful, but much more geared towards advanced homeopathic prescribing.

Are you available for advice for other types of cases?

Yes! Please email me at nourishedandnurtured[at]gmail[dot]com.

Great post . I would love info on books that you used to learn Homeopathy as I believe it would greatly benefit our family . also did you go to school or a class to lear this . If so is there a course or school you recommend , please email me it ... I would really love to study this as well and help others . Have a great week Sarah!

Hi Leah,
Some good books to start with would be:
Family Guide to Homeopathy by Andrew Lockie
Homeopathic Medicine for Children and Infants by Dana Ullman
Those are both great for giving good hands-on information about using homeopathy to treat a variety of acute ailments (such as colds, flus, teething, etc)/

And then if you want a good book to start with for learning more technical, in-depth info about homeopathy, I would recommend The Science of Homeopathy by George Vithoulkas.

I myself have gotten bitten by the homeopathy bug, so-to-speak. I seem to spend a good amount of my "free" time reading and researching more about homeopathy, plus I generally work 1-3 actual cases a week. My homeopathic library is growing and growing; so far I have over different books on homeopathy.

My training has been largely self-guided, but I did take a 16-hour beginner's homeopathy class a year ago. That was taught by our family's homeopath, Alan Saxon. He doesn't live here, so I had to strum up enough students to make the class worthwhile for him (since he had to close his chiropractic practice for the time he was here teaching). There was a minimum of 5 students to cover his expenses (and that could vary somewhat depending on how much airfare is at any given time). Alan is also now my mentor as I continue studying and learning more, and he works with me on some constitutional cases that are being my level of training, so that I may learn along the way and he can provide any assistance I need throughout the case (Constitutional cases for adults can easily take many months or over a year to complete. Children seem to complete their healing much faster.)

If you are wanting to do an online homeopathy training, you may want to look into David Little's Homeopathic Online Education. His articles and materials are amazing. (I haven't bought his full curriculum yet, but the articles on his website have been extremely insightful. His website is simillimum.com

Hi Sarah! My name is Heather and I have a quick question about your blog! If you could email me at Lifesabanquet1(at)gmail.com that would be great!

I have ordered the two books you recommended. Can hardly wait to get them!

Hello Sara….
Thanks for introducing the classical homeopathy for constipation. Sulphur might have worked for Stephen constipation but body behavior and symptoms are different from person to person. So natural colon cleansing supplements are always safe and give the long lasting results. Of course they can’t give the immediate result as inorganic supplements but results are too good without any side effects. I heard that taking fiber rich foods which are found in vegetables, nuts, beans and fruits can avoid constipation. Drinking more water and regular exercises also helps to avoid colon problems.

Wow, I've never commented on anything before but this is my guy exactly, can't wait to try it!

How many pills r considered 1 dose?

It depends on the person and the size of the pellets. For many people, one BB sized pellet is one dose. For a person that is hyposensitive (less sensitive than average), more may be needed. For a hypersensitive person, sometimes the pellet needs to be broken or dissolved in water and then only a small portion of the water taken. It also depends on the potency being used.

hi! wanna know how to prevent constipation over kids. my son is 5 years old now and is habing constipation problem. he also doesnt like going to toilet as he always had hard time passing out the stools. sometimes i really feel sad for him. what should i do?

It sounds like he could really benefit from constitutional homeopathic treatment.