Teething Pain is No Match for Homeopathy

This article is a guest post by Joette Calabrese.  This is the fourth in a series on homeopathy for infants and children. 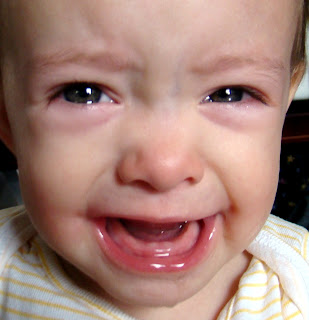 In my last guest post, I covered using Chamomilla to help babies sleep better, but I also want to share its efficacy for teething.

As you’ve probably learned by now, such a pat prescription is rarely the case with homeopathy.  Homeopathy treats each person as an individual and so the prescriptions are individualized.  Teething is a bit of an exception because this single remedy is likely to work for most children.
When we think of the typical picture of teething, we think of a child who is normally pleasant, but whose personality suddenly takes a turn for the worse in a matter of days or even hours.  All of a sudden, he’s whiny, needy, and capricious.  As moms I’m sure you know exactly the kind of mood I’m describing.  Your baby constantly wants to be picked up, but when you comply, he arches his back and screams for something else.  Nothing satisfies.  If you check his gums, you might find redness or swelling around an emerging tooth.  He’ll be chewing on toys and all the while drooling, drooling, drooling.
Try Chamomilla 30 every 2 hours for up to 5 doses.

Another remedy to consider for teething if Chamomilla didn’t help or wouldn’t hold is Calc carb.  As odd as it may sound, a child who has a rather large head, and particularly one who tends to perspire when nursing or sleeping, is an excellent candidate for the use of Calc carb.  Administer it in the same way as Chamomilla.
The last remedy to review is Silica.  This is also for a sweaty baby, but this child generally has a smaller head with fine textured hair and light skin. The hands and feet also perspire and the child often is milk intolerant.

Whichever remedy suits your babe, watch soon after you administer it for the emergence of the little tooth.  “Soon after” can be any time from a few days up to a month. Teething can be a trying time for our little ones, but as long as you’re prepared with homeopathy, you’ll all be able to sleep better and your child will flourish.

Please don’t think of teething as only something affecting very young children.  The exact same principles apply for the seven-year-old appearance of the adult teeth and again when the wisdom teeth appear in the late teens or adulthood.  Review the remedies above and approach it in the same manner, always including the assessment of temperament.

Some time ago, my 24-year-old son was acting rather cranky. Nothing was right in his life. I asked him what the matter was and he said, “I don’t know, I just feel irritable lately for some reason.  And besides, I think I feel a wisdom tooth coming in because it really hurts back there. My friends are getting theirs extracted.  Should I do the same?”

All the symptoms stacked up.  A few doses of Chamomilla and he was right as rain!  A few months later, I noticed he was a bit irritable again. Not as intensely as the first time, but nonetheless measurable.

“How’s that tooth?” I asked.  “It’s sore again.” “Ok, here you go.”  And I popped four pills of Chamomilla in his mouth.  Not a peep from him since, and that was over three years ago.
Unlike his friends, he avoided surgery, anesthetics, dry sockets, and antibiotics. One bottle of Chamomilla 200 cost me $15.  Compare that to a $1000  surgical bill! Once again, the body’s curative ability stimulated with a well chosen remedy won the day.

Here’s one more trick that I’ve learned over the years: use Calc phos 6x as an everyday remedy.   It is useful for children in particular because its main purpose is promoting  growth.  For teeth that are too soft or form cavities too easily, or for the pain of teething, it’s unmatched.  You may alternate Calc phos 6x  2-3 times per day along with your chosen remedy to get through the teething stage.  When improved, stop.

For years when my children were growing, I’d put about 8 pills of Calc phos in a gallon of their raw milk so I’d be sure everyone got his allotted amount.  It’s particularly valuable for kids who are teething or for any growth issue, as well as growing pains in the legs. This is one of the few homeopathic remedies that can be administered daily as a matter of course.
Joette Calabrese, HMC,CCH,RSHom is a homeopath and mom who has depended solely on homeopathy and nutrition in raising her family without a single drug….ever!
If you find this kind of information valuable, you can learn more about homeopathy at her site: homeopathyworks.net.  Contact her office at 716.941.1045 to schedule a FREE 15-minute consultation to learn if homeopathy might be a good fit with your health strategy.  Lots more homeopathic tips at her blog: http://homeopathyworks.wordpress.com.
Posted by Sarah Smith at 6:00 AM

Thanks so much for this, Sarah and Joette! I tried Chamomilla for my son when he was little and it did nothing. As that had been my third unsuccessful try with homeopathy, I gave up on homeopathy altogether. But this describes my son: "...a rather large head, and particularly one who tends to perspire when nursing or sleeping...". Neat! Based on this article, I will give homeopathy another go when need is indicated.

All my best,
Baden

Great Baden! Yeah, it is essential to find the right remedy based on many factors such as their appearance and personality. Then homeopathy works wonderfully!

Thank you to you both for these posts on teething and infants sleeping better. I have an 8 mo old boy who's got his 2nd top front tooth coming down now and he's doing pretty well with an amber necklace but is still frustrated and in some pain. So last night I went and got the Chamomilla and the Calc Carb. I just started the Chamomilla first to give it a day or 2 to see how he responds. It said to take 5 pellets/3 times a day, is that right for a baby too? Also, regarding the Calc Carb, my son has a big head and tends to sweat when nursing and sleeping. Why does that matter? I was curious when that was posted just because I don't see how or why that would make a difference. I'm looking forward to learning about that.

Hi Jenny,
I always reduce the number of pellets to 2 for my infant. I also dissolve the pellets in 1/2 cup of water, and then only give him 2 tsp of that as his dose. This really helps in preventing any unwanted aggravations ( which most people don't seem m to have, but my family is particularly sensitive).

As for your question about why the head shape and sweating would matter: one of the things that sets classical homeopathy apart from other healing modalities (such as herbs) is that homeopathy is individualized treatment. That means that the whole person is taken into account in determining the correct remedy, rather than just having the same remedy for all people. I know this is a bit strange in our culture of one-size-fits-all solutions, but this individualized perspective is one of the hallmarks of homeopathy and in my opinion that is one of the reasons it works so well.

Hi – It’s good to read such interesting stuff on the Internet as I have been able to discover here. I agree with much of what is written here and I’ll be coming back to this website again. Thanks again for posting such great reading material!!

Have you ever tried clove oil for teething? I hear it works wonders on teething babes and on anyone with a toothache.

I've never tried clove oil myself, but I know others who have liked it for teething.

I'd like to order the Chamomilla and my options are 30C OR 30X which do you use?

Hi Sarah,
Please help with the Silica and Calc Carb also, which do you use the 30C OR 30 X Or different? Thanks in advance

Also, I don't see Calc phos 6X only 12x on ABChomeopathy.com, have you tried this one and using half the dose or is it not the same?

I use 30c as a general starting point. Sometimes less ( like 30x) if that is all I can get or for someone who is very weak, very young, or very old.

I personally don't give cell salts on a daily basis, but ave used them occasionally in 12x potencies.